Mike Villarreal Resigns from Legislature to Focus on Mayoral Race 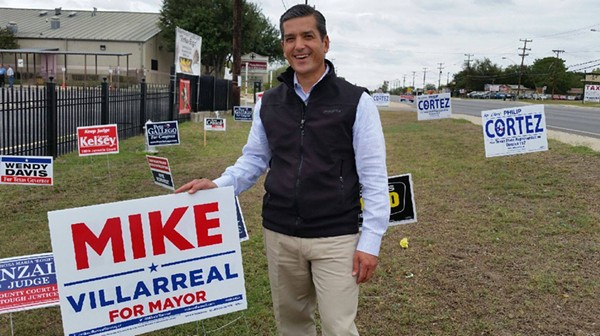 Monday morning as he was filing his first bills for the 2015 Texas Legislature, State Rep. Trey Martinez Fischer, D- San Antonio, expressed interest in running for Sen. Van de Putte's Senate seat should she decide to run for mayor of San Antonio:

"If Senator Van de Putte chooses to continue her service to our community by entering the race for San Antonio Mayor, I will give serious consideration to asking the voters of Senate District 26 to allow me to be their voice in the Senate," he said in a statement.

Two days after winning reelection, Rep. Mike Villarreal, D-San Antonio, formally resigned from his long-held position in the Texas House of Representatives to focus on his local campaign for mayor. Villarreal sent his letter to Gov. Rick Perry Thursday of last week and held a press conference Sunday.

A few hours after Villarreal made his public announcement this weekend, Sen. Leticia Van de Putte acknowledged the whispers that she's also considering a run for mayor. She lost the lieutenant governor's race to her Republican opponent Dan Patrick, a senator from Houston, last week.

"Recently, many business and community leaders have asked me to play a new role in service to San Antonio, as Mayor. I am humbled by their confidence and support," she said in statement. "At this time, I am enjoying my family and praying for guidance."

Villarreal's resignation now sets the stage for a special election, in which the more than 80,000 registered voters in his district will decide who replaces him at the Capitol. That election could happen as early as next month. Should he have resigned before the August 21 deadline, the local Democratic Party precinct chairs would've selected his replacement.

With Villarreal's resignation and Van de Putte's acknowledgement that she might throw her hat in the ring, the local mayoral race is starting to heat up, with the field of candidates likely to grow. Other potential contenders, as we've reported in the past, include Councilman Ron Nirenberg and former Bexar County Commissioner Tommy Adkisson. Paul Martinez, a retired army officer and self-described independent, has also announced his intentions to seek the mayoral seat.