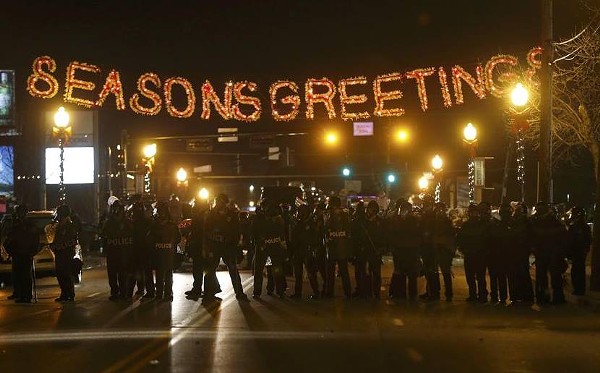 Following last night's announcement that a Missouri grand jury found no probable cause to indict Officer Darren Wilson in the fatal shooting of 18-year-old Michael Brown, response rallies and calls to action are planned across the country tonight.

San Antonio's will take place at the Bexar County Courthouse at 300 Dolorosa Street beginning at 6:30 p.m. this evening.

According to the Facebook event, more than 1,000 people have been invited to attend. Note: Beware of the hate and insensitivity spewed by some in the comments section of the event page.

Last night, prosecutor Bob McCulloch announced live to the nation that after months of sifting through evidence and listening to witnesses, a 12-body grand jury decided not to indict Wilson. McCulloch also released the mountains of evidence in the case, which you can find here thanks to the Washington Post.

Following the announcement, the Brown family released this statement:

We are profoundly disappointed that the killer of our child will not face the consequence of his actions.

While we understand that many others share our pain, we ask that you channel your frustration in ways that will make a positive change. We need to work together to fix the system that allowed this to happen.

Join with us in our campaign to ensure that every police officer working the streets in this country wears a body camera.

We respectfully ask that you please keep your protests peaceful. Answering violence with violence is not the appropriate reaction.


Catch up on the reaction to the announcement, which took place everywhere from the social media sphere to the streets of St. Louis to the White House, via National Public Radio. The Marshall Project also has a roundup of the best coverage and analysis of the events that unfolded in Ferguson, Missouri.