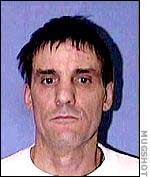 Scott Louis Panetti believes he is going to be executed for preaching the gospel.

That's far from the truth, but Panetti—a diagnosed schizophrenic, who is insane and suffers delusions—is being executed for murdering Joe Gaitan Alvarado, Jr., 55, and Amanda Carrion Alvarado, 56, in 1992 at their Fredericksburg home.

The Alvarado's were his estranged wife's parents.

"Panetti has been on death row since 1995, when a jury found him guilty of capital murder after he represented himself in court. During the trial, Panetti dressed like John Wayne—tying a purple handkerchief around his neck, tucking his jeans into boots and wearing a cowboy hat secured with a stampede string—and attempted to issue subpoenas for John F. Kenney, Jesus Christ and the pope," the San Antonio Express-News reported.

"Scientific knowledge about schizophrenia and schizoaffective disorder supports the conclusion that persons in Panetti's condition cannot rationally understand the reasons for their execution. Convinced of the reality of their delusions, they simply cannot grasp the essential truth: that their impending execution is retribution for their crimes," the APA wrote in a 2007 Amicus brief to the United States Supreme Court.

The Express-News reported Wednesday that the Texas Court of Criminal Appeals dismissed Panetti's appeal by a 5-4 vote on a technicality. The paper also ran a strong editorial calling on Texas Governor Rick Perry to stay the execution.

"Gov. Rick Perry should stay Panetti's execution so he can undergo a competency hearing. Continuing with this execution without first truly establishing competency, or developing a treatment plan to attempt to establish competency, simply dismisses the complications of severe mental illness and justice," the editorial board stated. "If the execution is carried out, Panetti will die believing Satan is punishing him for preaching the Gospel of Jesus Christ. That would make this execution mindless vengeance."

And they are exactly right.

If Panetti is executed on December 3, he will be the 11th Texas inmate put to death this year.