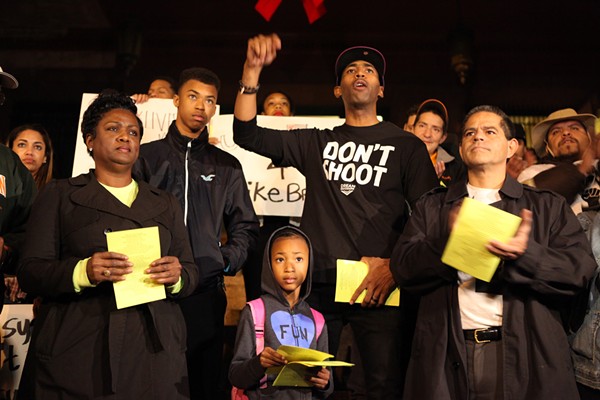 On Friday, November 28, San Antonio protesters will reconvene at the Bexar County Courthouse for a rally and march held in solidarity for Ferguson, MO. Organized by a group of citizens that bill themselves as SATX4Ferguson,  the protest is meant to highlight the excessive use of force by law enforcement and Monday's grand jury decision to not indict Ferguson Police Office Darren Wilson in the shooting death of Michael Brown.

On Tuesday, dozens of San Antonians gathered at the courthouse in Main Plaza for a peaceful demonstration, one day after Ferguson erupted in violence and protest over the grand jury decision. Friday's rally will occur downtown between 4 p.m. and 7 p.m. and will coincide with the annual tree lighting at the Alamo and the River Walk lighting and parade. The march will begin at the Bexar County Courthouse (100 Dolorosa) and make its way through downtown until it reaches the U.S. District Clerk's office, located at 655 E Cesar Chavez. You can find details and RSVP here.

While the Michael Brown shooting has dominated the national conversation about race relations in the United States and the use of force by law enforcement, many who attended Tuesday's rally highlighted police action taken by law enforcement in Bexar County. Just this week, a federal judge made a pre-trial ruling to send the Robert Cameron Redus wrongful death suit back to state court where it was originally filed by his family. Redus was shot five times by a University of Incarnate Word police officer in an off-campus incident at the Tree House Apartments in Alamo Heights last December. Redus' family maintains UIW failed to properly train Christopher Carter, the office involved in the incident, on the proper use of force.

UIW continues to stand by Carter's actions. The officer maintains that he feared for his life during a confrontation that began as a routine traffic stop. There are multiple witness accounts that piece together what happened prior to Redus' death, but none that provide a full account of the incident. A ruling on whether to publicly release audio and video of the confrontation and shooting has yet to be made. Earlier this month, UIW asked a federal judge to prohibit public access to the recordings, which the Alamo Heights Police Department initially declined to release citing the on-going investigation. The judged deferred the decision, until it could be made by the state court that will ultimately hear the case.

On November 20, the San Antonio Express-News Editorial Board published an op-ed calling for the release of both the audio and video.