No, Selena's Killer, Yolanda Saldivar, is Not Being Released From Prison

Twitter went apoplectic yesterday after a fake news site reported the early release of Yolanda Saldivar, the reprehensible monster that robbed the world of the shining light that is Selena. The notorious former fan club president is currently serving a life sentence in Gatesville, Tex., prison for the 1995 murder of Tejano music's greatest legend.

The "news" of Saldivar's early release came from The National Report, which bills itself as "America's #1 Independent News Source" and convinces readers of such by plastering the dumb, stupid faces of Ted Cruz and Sarah Palin on their header. It's one of the many conservative fake news sites that try and fail to be The Onion due to an extreme right-wing inability to grasp basic concepts like "sarcasm" and "humor." In a report completely devoid of jokes, the site claimed Saldivar was granted an early release for January 1, 2015, due to ailing health, and, oh my god, that's not even funny! Seriously, why would you even play like that, esé?

Just so everyone knows, Saldivar is ineligible for parole until March 30, 2025 and is serving the maximum sentence the law would allow for killing the angel who was sent from heaven to preach the gospel of Tejano.

Some of The National Report's other completely hilarious gems include, "Gov. Rick Perry Suspends High School Football In Texas" and "17 Texas Kindergarteners Contract Ebola After Exposure To Liberian Foreign Exchange Student," because publishing a fake story that could stoke an irrational fear of black people is always a laugh riot. Another headline from The National Report's front page reads "Actress Of Rudy Huxtable Fame: 'Bill Cosby Drugged And Sexually Harassed Me While Growing Up On The Cosby Show'." Sure why not diminish the experience of alleged rape victims and harm their credibility by writing a fake, but topical story about rape? It'll bring in the page views.

To ensure they really messed with every Mexican-American's head, writers attempted to give credence to its terrible and terribly unfunny lie by setting up a page on Change.org, the petition site where people who don't participate in democracy go to participate in democracy. The December 8 petition appears to be created by a Beatriz Garcia from Mexico City, who was most likely named by opening a Spanish textbook to a random page. The description "Garcia" included on Change.org should tip people off to its inauthenticity.

The murderer of Selena Quintanilla-Perez is slated to be released from prison early due to health issues. This would be an abortion of justice. Please do not release this woman who took the life of such a promising and talented woman. Yolanda Saldivar needs to serve out the rest of her sentence, and be behind bars for the remainder of her natural life. 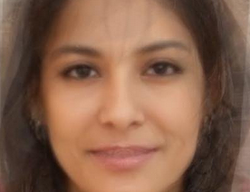 The words convey a tempered, measured response that would be impossible for most Selena fans, because Selena is everything; Selena is life, and why would you hurt Jesus by letting out the woman who killed our Selenas?

But if that doesn't convince you, a look at the profile page for "Beatriz Garcia" reveals no prior history on Change.org. And a simple Google reverse image search shows the photo to be the work of Mike Mike, a South African photographer who made news in 2011 for a series of images depicting the average face of women of various countries. Take a guess what photo is the first result in a Google image search for "average Mexican woman."

So not only did the writers at The National Report think it would be funny to rile up Latinos for shits and giggles and pageviews, they were almost offensively lazy in their effort to be convincing. Little effort was made to conceal their choice of profile picture, and they said the fake user was from Mexico, not Texas, where La Reyna Selena's beautiful spirit lives in our hearts and minds forever.

But the feeble attempt at authenticity worked. As of this post over 1,000 people have signed the petition, including myself, because, you can't mess around with something like this, even if you know its fake. (#AnythingForSelenas, right?)

Because the very mention of Yolanda Saldivar's name is enough to send many Selena fans into a rage, it's not difficult to imagine the response news of her early release would elicit. As the fake news story made its way across social media, Selena fans delivered on the anger and panic The National Report was hoping to incite. A firestorm of protest erupted on Twitter from Selena fans who believed the fake news.

Visit the next page to see some of the reactions from Twitter. Let's just say the name "Yolanda Saldivar" doesn't bring out the best in people. Say what you want about Selena's murderer, but the universal hatred people have for her is something that unites the Latino community.

First things first, Alyssa needs to break up with Ryan.

OMG OMG OMG OMG im so embarrassed. Ryan didn't know who #Selena was. THERE IS NO EXCUSE.

Now that that's out of the way, here's what Twitter had to say upon hearing the fake news.

I just heard Yolanda Saldivar could be out of jail on January 1. pic.twitter.com/C4Jkh7Dp5o

This bitch is responsible for J-Lo's career.. for that alone she should stay in jail....... http://t.co/g7mPUmPcoZ

Yolanda Saldivar is the IRL Bellatrix Lestrange to me.

Let #YolandaSaldivar ROT in prison. What she did to my beloved Selena is totally unforgettable..

IF YOLANDA SALDIVAR IS RELEASED FROM PRISON ALL THE MEXICANS ARE GOING TO RIOT. #anythingforsalinas #vivalaraza ✊

YOLANDA SALDIVAR IS GOING TO BE SET FREE IM NOT OK WITH THIS. NOT. O. K.

http://t.co/Dry5soTqqs OH HELL NO THEY BETTER NOT RELEASE THAT BITCH! ANYTHING FOR SELENAS

The Yolanda Saldivar thing was fake PRAISE THE MEXICAN GODS

Finally, let's finish things off with a dose of #truthtime.