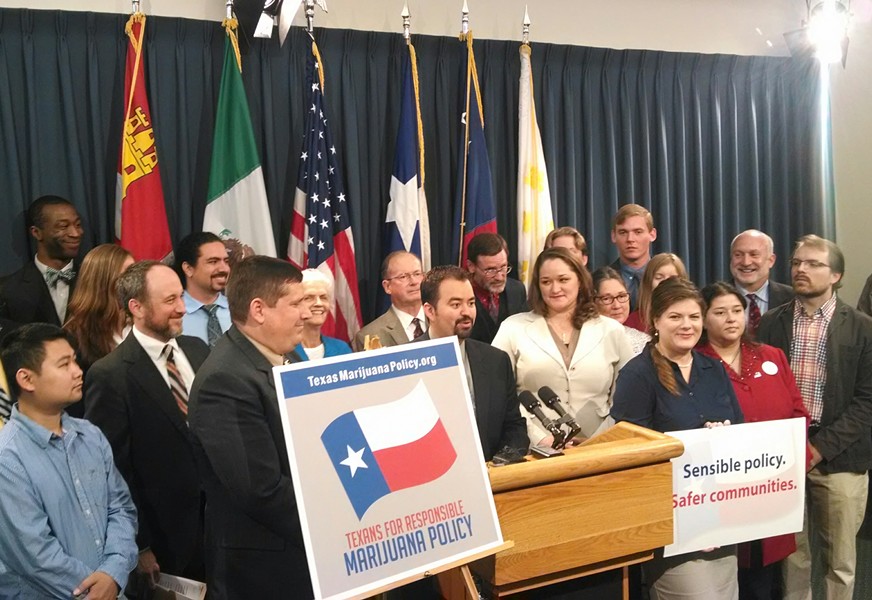 A Democratic state representative from El Paso proposes removing the threat of arrest, jail time and a criminal record for possession of up to an ounce of marijuana and assessing violators with a $100 civil fine.

"Our current marijuana policy in Texas just isn't working," Moody said in a press release distributed by the Marijuana Policy Project. "We need a new approach that allows us to more effectively utilize our limited criminal just resources. This legislation is a much-needed step in the right direction."

Texans convicted of possession of less than two ounces of marijuana face a max $2,000 fine and up to six months in jail.

Texas District Court Judge John Delaney, representatives from the American Civil Liberties Union of Texas, Republicans Against Marijuana Prohibition and the Marijuana Policy Project were all on hand to show support for Moody's bill.

"The War on Marijuana is a failure and has needlessly ensnared hundreds of thousands of people in the criminal justice system, at tremendous human and financial cost,” Simpson said.

Delaney, a retired judge, said the law would allow law enforcement agencies and the judicial system to better use resources.

“Giving a ticket for small amounts of marijuana makes sense,” Delaney said. “The fine can be paid by mail, so police, prosecutors, and our courts will be able to use their limited resources for more important matters.”

“The prohibition of marijuana is diametrically opposed to the Republican principles of limited government, individual responsibility, and personal freedom. There is nothing conservative about it,” Lee said.

“Most Americans are fed up with laws that saddle people with criminal records just for possessing a substance that is less harmful than alcohol,” Fazio said.

Nineteen states and the District of Columbia have removed the threat of jail time for possession of small amounts of marijuana.