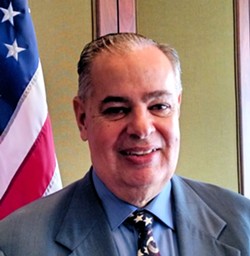 This Q&A has been edited for length.

You are a Republican running in a predominantly Democratic district. In fact, Mike Villarreal has been easily reelected for years. What makes this year's race to replace him different?

This year’s race is different because the Democratic residents in House District 123 are beginning to realize that their values of traditional family life, pro-life beliefs, reducing property taxes, and protecting the social security benefits of our retired senior citizens are more in line with the Republican Party than the Democratic Party. They are beginning to realize that most of the Democratic Party’s promises about immigration reform and helping the middle class are just that ... empty promises that have not been kept.

Tell us about your professional and civic background and how that qualifies you to hold political office, since you're never held one before?

My wife and I own Integrity Insurance Agency, an independent insurance agency that serves many small businesses and individuals in the areas of health insurance, business insurance, and personal insurance. Most of our clients have been with us for over 15 years because of our service level and commitment to them. Prior to 2007, we were very content members of the silent majority. We always voted, but never saw the need to get involved in politics. In 2007, we got very concerned about the direction our country was headed in. Never one to gripe just for the sake of talking, I decided to get involved. I joined the Alamo Pachyderm Club in 2010 and became the President in 2011. Under my leadership, the club has grown into the largest Pachyderm club in the country and hosted the national convention here in San Antonio in 2012. I have been a delegate to the last three state Republican Party Conventions and served Texas at the National Convention in Tampa.

As a small business owner for the past 20 years, I know what it means to write out paychecks every two weeks. I know what it takes to lead an organization and find consensus when people disagree. That quality is very lacking in both Austin and Washington D.C.

What will your priorities be if elected to the Texas Legislature?

HD 123 is made up of hard working blue-collar folks that earn less than $50,000 per year. 15 percent of the residents are retired, living on fixed incomes. The majority of the residents in HD123 spend over 35 percent of our income on our homes, whether we own or rent them. Most of us are employed by small businesses. My priorities will be to the residents of my District, then to Bexar County, and lastly to Texas.

We have significant challenges in our state, and I'm thinking specifically of health care, public education and transportation. Solutions brought forth by Democrats and Republicans vary widely on these issues. What will you bring to the table in terms of ensuring access to health care and public education, as well as viable and long-lasting infrastructure improvements?

The costs of Obamacare (the Affordable Care Act) are just now beginning to kick in to the average working person. The first policies that are truly compliant with the Affordable Care Act are set to begin this year ... I spoke to one young man just this week. His policy cost him $124 per month in 2014. It was a PPO with decent benefits. It was not offered in 2015 because it does not meet the minimum guidelines required by the federal government this year. His new policy is a HMO with no out of network benefits, a $6,600 deductible, and is costing him $174 per month. He can hardly afford this on his $30,000 per year income.

Public education needs to be reformed big time: 26 percent of the adults living in House District 123 did not graduate from high school. We need to restructure the priorities of our school districts by adding vocational skills training in our elementary schools. Not everyone will go to college. I am the only candidate that thinks we need to consolidate the 17 independent school districts in San Antonio. The administrative savings would allow more money to spend on teachers. Having only one ISD would level the salaries on all teaches in San Antonio, which would encourage stronger teachers to go teach in our lesser performing ISDs.

What differentiates you from your opponents?