Can You Guess What Texans Googled Most in 2014? 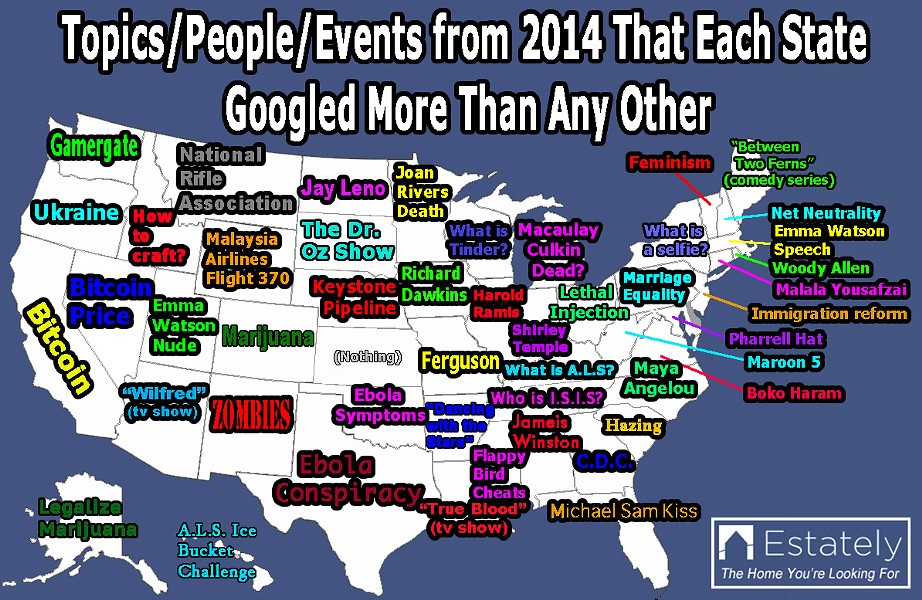 We googled some weird stuff last year. In case you’re curious about what everyone was getting so search-happy about, Estately has done us the service of creating a map of  each state’s most frequently searched term from 2014. One look at the map above shows we should be especially ashamed of some of our searches (I’m looking at you, Utah).

New Mexicans were especially concerned about zombies last year. Or maybe they just think zombies are really cool and wanted to look at pictures of them. I don’t know because I’m not from New Mexico.

Idahoans asked Google “how to craft?” over and over. How to craft what, you guys? What are you trying to craft? Are you just trying to craft in general? Well, I guess that is one way to make yourselves more interesting. You could craft and open up some Etsy shops. Keep it up.

Wisconsin and New York had some embarrassing questions for Google too: Wisconsinites asked, “What is Tinder?” and New Yorkers were wondering “What is a selfie?” Ha! Come on. Everyone knows what a selfie is. You can find a ton of selfies on Tinder.

And it looks like we'll be googling "ebola conspiracies" well into 2015. Today, near Fort Hood in Killeen, a soldier identified as Spc. Kendrick Vernell Sneed was found dead outside his apartment building. Sneed recently returned to the United States on emergency leave from a deployment in Liberia where he was assisting the effort to fight the ebola outbreak. Two tests confirmed that the soldier did not contract the virus, but his death and recent deployment was enough to spark a brief ebola scare in the central Texas city.

The return of ebola to headlines should renew our efforts to get to the bottom of any fabricated ebola conspiracies, so get to googling, Texas.