Have Creeping Corporate Interests Led Us To Lose Sight of MLK’s Dream? 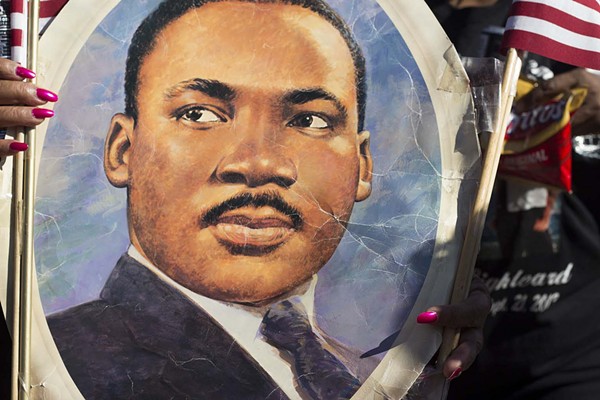 As retail giants promote sales and corporate-sponsored Martin Luther King Jr., Day events kick off nationwide, community organizations and social justice groups in San Antonio want to take back King’s dream, urging elected officials and companies to put his vision of equality and basic civil rights into practice through policies that give everyone a fair shot.

Their concerns are echoed nationwide, as activists and community groups call attention to the deep-seated racial injustice the country is still grappling with, most recently amplified by the high-profile killings of unarmed black men Michael Brown and Eric Garner by white police officers.

“I think a lot of times, we have a belief but it comes to putting it into practice, that belief flies out the window,” said Oliver Hill, president of the San Antonio chapter of the NAACP, the country’s oldest black civil rights group, adding that King’s work extends beyond rights for the African American community, but also for anyone who is marginalized and without a voice.

For 25 years, San Antonio has hosted a nearly three-mile long MLK Jr. march to commemorate Dr. King’s life and legacy. For years, the city boasted that the event drew the largest crowd of any march in the country, though recently, organizers have called it one of the largest.

Leading up to the march, San Antonio hosts the 12-day “DreamWeek,” a series of dozens of community and cultural events around town such as lectures, summits and music shows, meant to honor the influence and legacy of the civil rights leader.

“We’ve done this for (25) years,” said Bishop David Copeland, who serves as chairman of the MLK Jr., Commission, the city-county volunteer organization that coordinates the march. “We are a community that knows how to come together at certain moments.”

Community leaders hope, though, that the high attendance is not in vain. While it’s important to celebrate King’s vision on this day every year, Hills wants to make sure companies and participants are doing it for the right reasons rather than a promotional opportunity or “just for show,” he said.

“What have they done for the community?” he reflected. “It just makes me wonder if there isn’t a way that we all collectively ask what we can do to improve conditions for people that are not well off, and then at the same time, ask each company to look within their own and ask what they are doing to ensure that people are able to move up?”

Sponsors run the gamut, from groups like the AFL-CIO and community colleges to H-E-B and Valero. Local social justice groups such as the Esperanza Peace and Justice Center and Southwest Workers Union question the heavy corporate presence at the city’s MLK Day celebrations.

Though Javier Flores with the Commission said marchers line up on a first come, first served basis, Diana Lopez with SWU and Itza Carbajal with Esperanza remember politicians and corporate sponsors leading last year’s march, a detail they see as being counterintuitive to the social justice and grassroots nature of Dr. King’s movement back in the 1950s and 1960s. These are the exact individuals and entities contributing, or not fully addressing, concentrated poverty on San Antonio’s east and west sides and gentrification, to make a few.

A 2014 study by the Martin Prosperity Institute also found that income segregation is highest in San Antonio among other major U.S. metropolitan areas, including New York, Houston and Washington D.C.

“It’s a kick in the face when it comes to really addressing those issues,” Lopez said. “The one day that they talk about honoring civil rights and the work that happened during that time just happens doing those few hours and for the rest of the year it’s being ignored.”

Copeland said the key to fully achieving King’s dream is continued community dialogue. He said the MLK Jr., Commission wants to host other events throughout the year to maintain the conversation, not just about Dr. King’s work and legacy but also about today’s systems and policies that often prioritize money and business before human needs.

“What tends to happen is that people go back to their various silos and they continue to do what is easy for them and make the assumption that just about everybody has the same as they do,” Copeland said. “There are some that come to the march on a bus, assemble and march for 2.5 miles, and get back on the bus and go to work. Whether that solves anything, I’m not sure. It would be my hope that in the future we will have a meaningful discussion about our laws.”