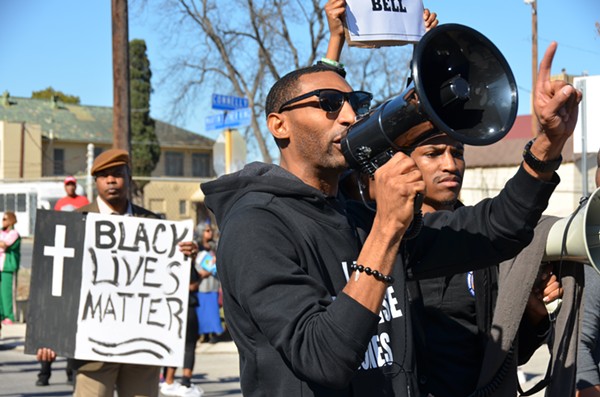 The demonstration, organized by the community activist group SATX4, disrupted the flow of the march near the corner of Martin Luther King Boulevard and Connelly Street when a few dozen activists played dead in the middle of the march.

The protest continued for 19 minutes and 30 seconds to symbolize three high-profile police killings last year. Four minutes and 30 seconds represented the number of hours Michael Brown's body laid in the middle of Canfield Drive in Ferguson, Missouri, before it was retrieved by a medical transporter. Brown was shot and killed last August by Darren Wilson, a former Ferguson police officer who eluded criminal indictment for the shooting. Eleven minutes of the demonstration were meant to represent the number of times Eric Garner cried, "I can't breath," before he was killed by New York Police Department officers who were trying to detain him for selling loose cigarettes. Those officers also avoided criminal indictment. Four minutes of the protest represented the number of hours that passed before the sister of Marquise Jones was able to notify her family of her brother's death. Jones, 23, was shot and killed outside Chacho's at Loop 410 and Perrin Beitel by San Antonio Police Department Officer Robert Encina last February. Jones's family has since filed a civil rights law suit against SAPD.

As the die-in progressed, a crowd gathered to watch the peaceful demonstration. San Antonio Police Department officers stood largely on the sidelines, directing the flow of the march around the protest. SATX4 demonstrators, who were also joined by protesters from the Esperanza Peace and Justice Center, were located near the front of the pack, behind most of the politicians involved in today's annual march, including State Senator Leticia Van De Putte and Congressman Lloyd Doggett. Behind the protest were thousands of participants from various local companies and community groups. While the flow was slowed, marchers filed along the sidewalk around the few dozen protesters lying on the street and continued to the route's end about a block away.

The SATX4 demonstration was perhaps the most noticeable component of the largely staid, peaceful annual rally. The group has staged previous protests at the Bexar County Courthouse in response to the grand jury's decision not to indict Darren Wilson in the death of Michael Brown.