Want To Be Part of Texas' One Percent? Here's How Much You Need To Make 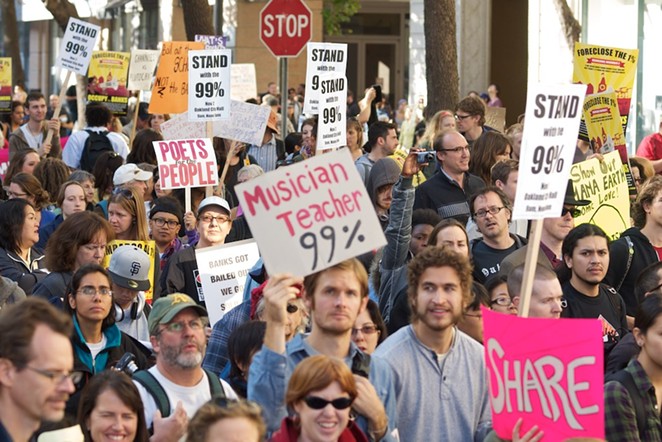 The Economic Policy Institute published a study this week detailing the growing levels of income inequality in the United States. As part of their analysis, the think tank published a map highlighting the amount of income all of us plebeians have to earn to reach the upper echelon of the top one percent in each state.

Income inequality has been an issue for decades as higher income earners accumulate greater percentages of overall wealth, but since the financial collapse of 2008, the economic recovery has heavily favored the wealthiest of Americans while wages have remained relatively stagnant for the rest of us.

The entire study is definitely worth a read. In it, the Economic Policy Institute notes that between 1979 and 2007, income growth in Texas has increased on average by 26.6 percent. Sounds pretty good, right? Don't start making it rain just yet. When the data is broken down, it reveals the incomes of the top one percent of Texans increased by 124.1 percent during that same period, while the rest of the population saw an income growth of only 13.5 percent over nearly three decades. After the Great Recession, the bottom 99 percent of earners in Texas saw their incomes increase by a meager 1.7 percent, while one percenters saw an income growth of 50.2 percent during the economic recovery. In Texas, the average income of the top one percent in Texas is currently 33 times greater than the average income of the bottom 99 percent.

If you want to be a top one percent earner in your state, you might try your luck in New Mexico, where an annual income of $241,000 would get you in that bracket. Just think of all the dreamcatchers and turquoise jewelry you can buy.