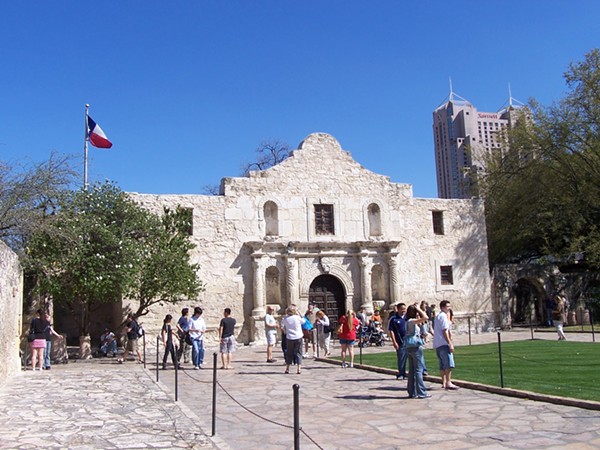 When we blogged about a San Antonio representative who wanted to create specialty license plates to fund renovations at the Alamo, we noticed the proposed bill on file didn't include any language regarding renovations.

SA Rep. Lyle Larson filed the bill on January 21 and told local media proceeds from the plates would fund the renovations, as well as educational programs. But the proposed bill only stated the proceeds from the proposed plates would go to the Texas Historical Commission and be dispersed to the the Alamo Mission Chapter of the Daughters of the Republic of Texas to fund Texas history education programs.

Larson did say he planned to amend the bill, and now we know the reason language regarding renovations was left out in the first place. After filing the bill sans renovations, Larson met with the new General Land Office Commissioner, George P. Bush. Yes, another Bush.

Lynlie Wallace, Chief of Staff for Larson, told us via email that Bush and Larson discussed Alamo preservation needs and Bush told Larson renovations will cost between $4 and $5 million.

"Rep. Larson decided he wanted to amend the bill to split the proceeds so some can be used for preservation," Wallace said. "He had already filed the bill when he received this information from GLO."

According to Wallace, Larson is investigating amending the bill to split proceeds from the sale of the license plates between the General Land Office and the Texas Historical Commission. The General Land Office handles preservation work and the Texas Historical Commission would disperse funds for education programs put on by the Alamo Mission Chapter of the Daughters of the Republic of Texas.

"We will likely submit a committee substitute with these amendments when the bill is heard in committee," Wallace said. "We aren't sure of an exact timeline, because House committees have yet to be named, but I would guess sometime in late February to early March."

If the bill passes, the plates will feature an image of the Alamo with the word "Remember" underneath it.