February 05, 2015 at 2:56 PM
comment
Well, that escalated quickly. Yesterday, we reported on the mayoral and presidential candidacies of Pogo Mochello Allen-Reese, an Army veteran, former male stripper and current crusader for Christ. The fringe candidate briefly enlivened the mayoral race with his enthusiasm and his past as an exotic dancer. But in less than a day, what started as a fun little story featuring a colorful character quickly took a turn for the weird.

Over the past 24-hours, Reese has gone on a posting frenzy on his personal Facebook page and the page of an Oprah Winfrey Facebook group. Among the dozens of posts, are crudely edited images of fellow mayoral candidate candidate State Sen. Leticia Van de Putte. In the images, which you can see below, Reese refers to Van de Putte as, a "big fat ho" and "sasquatch monster, and overlays pictures of her face on the character Jabba the Hut from Star Wars, a hippo and Big Foot. Reese posted the images several times in between a number of posts about Oprah Winfrey.

In interview with the San Antonio Express-News, Reese noted the city's place among the ranks of the nation's most obese cities. He stated he wanted to be a source of inspiration, claiming his career as a stripper helped him lose weight. 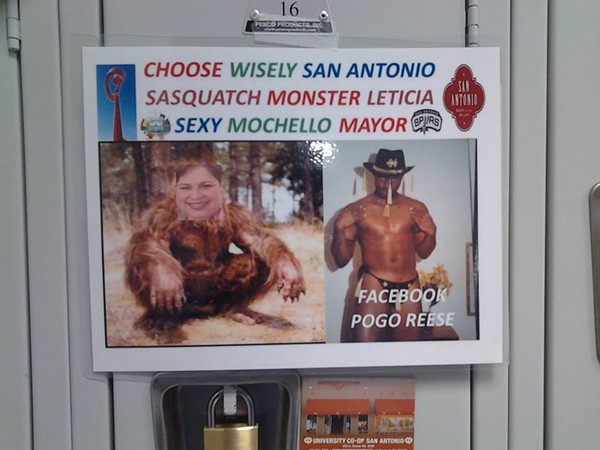 Van de Putte wasn't the only target of Reese's Facebook posting tirade. He took to the social media platform to draw comparisons between State Rep. Mike Villarreal, who is also running for mayor, and the dictator Josef Stalin.

Reese did not return the Current's multiple requests for an interview, but on Facebook, he acknowledged the attention he has received from a number of media outlets, stating, "If reporters harass me to much, I wont hestitate [sic] to go camping in the woods again."