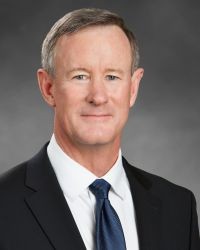 Bill McRaven, retired admiral and the newly appointed chancellor of the University of Texas System, expressed support this week for Texas’ law that offers in-state college tuition rates for undocumented students who graduate from a Texas high school and have lived in the Lone Star State for three years.

The law, which passed in 2001 with bipartisan support and has been championed by former Gov. Rick Perry, became a point of discussion during the general elections last year, and just a few weeks into the legislative session, some Republican lawmakers, including our newly elected Lt. Gov. Dan Patrick, are interested in repealing the measure.

McRaven, however, wants to see the law known colloquially as the Texas DREAM Act kept in tact, calling it the "morally right thing to do" during an interview with the Texas Tribune's Evan Smith.

“If we have been doing that for these undocumented students for at a minimum the past three years as they’ve made it through high school, and in many cases since they were in elementary school, I think it’s appropriate to continue to educate them," he said.

In the interview, McRaven challenged Patrick's notion that offering undocumented students in-state tuition rates will serve as an incentive for illegal immigration to Texas.

"Can you show me statistics that show people are coming across the border in order to get a higher education?" McRaven said.

McRaven assumed his post as UT System chancellor in January and told Smith that if the Texas Legislature calls him to testify on the issue this session, he'll express his support for the law.