McDonald's Screws Up Another Ad Campaign, This Time In Mexico 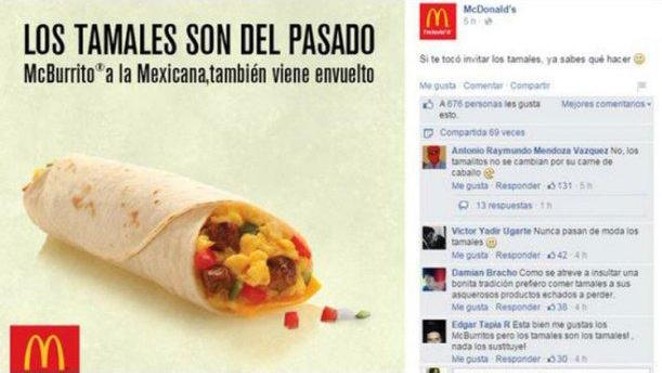 In a misguided marketing ploy, McDonald's managed to piss off an entire country. And, no, this time it wasn't the United States.

In a Facebook ad posted by McDonald's Mexico last Tuesday, the seers behind the Golden Arches declared that tamales are a thing of the past, Texas Monthly reported Monday. The advertisement featured a photo of a burrito with the words "McBurrito Mexicana also comes wrapped."

The advertisement followed the February 2 religious holiday Día de la Candelaria where families dress their children as the "Christ Child," have them blessed and then gather with friends and family for fun, and you guessed it, tamales.

This being the age of social media, McDonald's was promptly mocked on Twitter and Facebook and the international fast food chain withdrew the ad and apologized.

"We are proud to celebrate Mexican traditions and cuisine in our restaurants. Our menu includes local specialties, such as McMolletes, Mexican Ranchero eggs, and churros pastries, as well as traditional Mexican salsas to condiment all our burgers," McDonald's said, according to The Guardian. "This year we will celebrate 30 years in Mexico, and are grateful to be a part of the lives of thousands of families who choose us every day."

But no country is safe from the Golden Arches' advertising department.

In January, McDonald's made a huge segment of America collectively puke with its Super Bowl advertisement that features people at cash registers when a smiling employee — who in real life is most certainly held below full-time employment and paid minimum wage — cheerfully informs the customer they can pay for their food with "lovin'."

This could get weird fast, but according McDonald's, "lovin'" could be calling your mother to tell her you love her or fist bumping an employee.

Thankfully, the "lovin'" campaign ends on Valentine's Day — because we know how popular McDonald's is as a spot to take your sweetheart out for chicken nuggets and assorted sauces on one of the year's most romantic days.