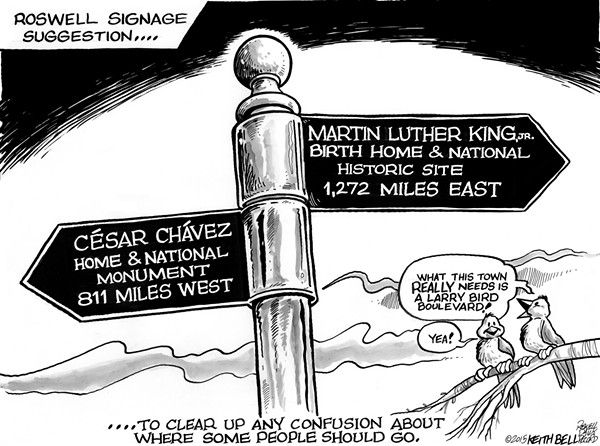 Well, the above cartoon should clear up any confusion, Mexicans should head to California because César Chávez is from there and blacks should go to Atlanta because it's Martin Luther King Jr.'s birthplace.

Like the cartoon tried to clear up confusion, so did an unnamed staffer on the Roswell Daily Record's Facebook page, saying the editorial cartoon actually references a hyper-local street-naming issue in Alien City.

"The intent was that just as Larry Bird has no connection to Roswell, neither do MLK nor César Chávez. The cartoonist meant that if we are going to have honorary street signs, the individuals named on those signs should have connections to Roswell. The intent of the cartoon was that the idea of renaming streets here in Roswell is mostly considered superfluous," according to a newspaper staffer.

Larry Bird also stands as no comparison to Chávez or King, neither of whom ever earned an NBA championship ring, though they influenced society for the better as champions of civil rights.

"We certainly did not imagine it would be interpreted as wanting people to leave our town permanently," according to the Roswell Daily Record.