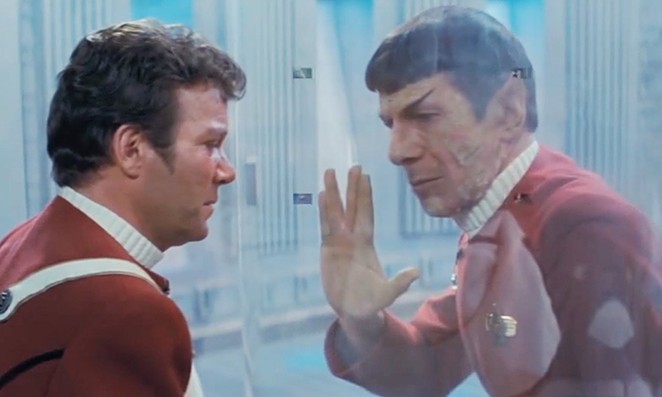 Leonard Nimoy was laid to rest on Sunday, following a private, intimate Jewish ceremony attended by family and friends in Los Angeles. The world will continue to memorialize Nimoy in the days and weeks ahead, and local Star Trek fans in San Antonio will have three opportunities to remember the prolific entertainer best known for his portrayal of Spock in the Star Trek franchise.

On Thursday, the Alamo Drafthouse Park North will team up with SA's Jason Davis and Ken Farley of The Nerd 411 podcast for a free Leonard Nimoy memorial screening of Star Trek II: The Wrath of Khan. The second major motion picture outing for the franchise is perhaps the most critically-acclaimed Star Trek film. The film fittingly features the death of Nimoy's half-human, half-Vulcan character, in what many consider to be one of the most poignant and memorable death scenes in all of science fiction.


Reservations for Thursday's 7:30 p.m., showing filled up less than an hour after the screening was announced. But the Alamo Drafthouse has since added a second screening on Thursday, March 5 at 10:30 p.m. in response to the huge demand. You can RSVP to the recently added second showing Leonard Nimoy memorial screening on Eventbrite. Expect reservations for the second show to fill-up quickly, and note that an RSVP does not guarantee admission, and seating is on a first-come, first-served basis, so you'll want to arrive early.

On Saturday, March 14, members of U.S.S. Bexar, the San Antonio chapter of the international Star Trek fan club STARFLEET, will gather at Gamelot (7088 Bandera Rd., 758-5589) at 1:30 p.m., for a celebration of Nimoy's life, work and cultural influence. Photographs and other Trek memorabilia will be displayed, and local Trekkies will share stories of their real life encounters with the pop cultural icon.

Commodore Robert Ybarra, commanding officer of U.S.S. Bexar, shared his stories via email with the Current of his many encounters with Nimoy on the Star Trek convention circuit.

"Our first encounter was a convention in Florida," Ybarra said. "He was extremely motivational, hospitable, and very friendly. His strong spoken demeanor, his unmistakable voice resonated as he spoke."

During that convention, Nimoy shared with the audience the origins of his iconic Vulcan salute, the split-fingered gesture that often accompanied Spocks signature phrase, "Live long, and prosper." Eight-year-old Nimoy first noticed a Jewish rabbi doing the hand gesture during synagogue services. According to Ybarra, Nimoy clarified that the v-shape mimics Shin (ש), a letter in the Hebrew alphabet. The letter is used to spell "Shaddai" in Hebrew, a common name for God Almighty in Judaism. Nimoy noted this to Star Trek creator Gene Roddenberry, and the Vulcan salute was born.

Here is a New York Times video of Nimoy retelling the origins of his characters iconic gesture.