People Are Clamoring For Our Selena Issue 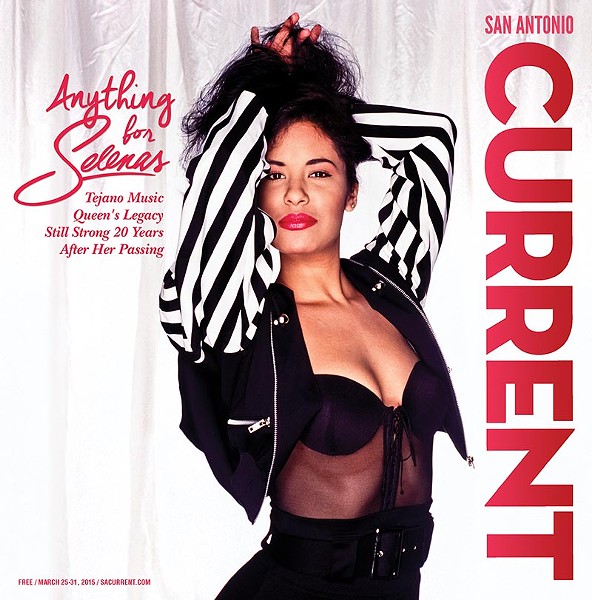 Due to an overwhelming response from San Antonio Current readers, we are out of copies for of this week's issue, and can no longer fulfill requests for copies.

This week, we profiled the lasting legacy of Selena Quintanilla ahead of the 20th anniversary of her murder on March 31. (You can read that story here.)

San Antonio Current Music Editor Matt Stieb wrote, "Since her death two decades ago, the commemorative tone for Selena throughout South Texas has been one of uncompromised reverence ... South Texas' treatment of Selena borders on the religious."

As soon as we published this week's cover online, featuring the Tejano music icon in all her fierce glory — that's the same image used on the cover of her third studio album, Entre a Mi Mundo, by the way — readers where clamoring to pick up a copy of the issue as if were a piece of religious iconography. A number followers on Facebook, Twitter and Instagram asked us where they can get a copy. The short answer is at roughly 1,000 locations in and around San Antonio. We have a handy map to help you locate a newsstand near you. But, fair warning, they're going fast.

Tried to pick up @SAcurrent at work and there were none :( I need my Selena!!

We're working to meet the demand. Let us know if one of our locations is out of copies by contacting our Distribution Manager Caleb Eckart at ceckart@sacurrent.com. Be sure to include the business name and address.

Some readers also wanted to know how much they had to pay to get a copy. Well, the San Antonio Current is and always has been free, but it's nice to know that merely publishing an image of Selena is enough for some people to be all #takeallmymoney.

Among the people ready to throw money at us are Selena fans from outside of the San Antonio area. We've had a number of inquiries from non-locals asking how to get a copy of the San Antonio Current. Well, we're happy to send one out to you. Just call our office at (210) 227-0044 to request a copy. We're open weekdays between 8:30 a.m. and 5:30 p.m. You can also email your name and address to Tara Caballero at tara@sacurrent.com. Again, the San Antonio Current is free, but postage is not, but Tara will take care of those details.

In related news, after we published our issue on Wednesday reader Manuel Barraza paid us a visit to our office to share his copy of a November 1995 issue of the San Antonio Current, featuring a piece that touched on the cult of Selena in the aftermath of her death. We were impressed that 20-year-old issue of ours is still floating around. Look for the cover story from that issue on March 31 here on our website.

Finally, at least one of our readers is holding onto to our Selena issue as a collector's item. He even framed it and everything. Here's a photo she shared on Instagram, plus snaps from other fans/readers who had to get their hands on our little publication. Thanks for reading, everyone!

So I framed my issue of the @sacurrent with mi reina on the cover! Is that weird? Btw @karolinasantiques has an ad in this issue that everyone is going to keep for years which makes me really excited too! #Selenaforever