Texas Tattoo Sham: Promoter Red Neilson Escorted Out Of Own Show For Nonpayment

Renee "Red" Neilson, promoter and creator of the inaugural Texas Tattoo Jam, which was supposed to take place March 27-29 at the San Antonio Event Center, was escorted out of her own expo by SAEC security Saturday afternoon. (Disclosure: The San Antonio Current was an in-kind media sponsor of the Texas Tattoo Jam.)

Neilson, who was accused of “misappropriation of funds” by her former employer Nikita Productions last year and allegedly fired, was asked to leave the venue by security for failure to pay SAEC owners the full amount for renting the facility. Neilson is also accused of not paying guest tattoo artists and talent, performers and musicians, venue security, and a local event management company.

“To stop a pending riot, she was basically evicted from the show,” Michelle Coben , co-owner of SAEC, told the San Antonio Current Sunday afternoon. “We all felt it was in her best interest to leave the building.”

Coben said Neilson initially paid her a $1,000 deposit to book the venue. SAEC usually asks renters to pay the remaining balance 5-15 days prior to the event, but Neilson did not. Coben said since she knew tattoo artists had travelled from California, Florida and even as far away as Italy to attend the show, she made the decision to open the doors for the expo anyway. Coben said they also had Neilson sign a new contract that stated she would pay the remaining balance hour by hour during the expo until the entire amount – $13,000 – was paid in full.

“At that point, she started going around asking tattoo artists for more money to pay for the venue because they were going to shut it down,” Marisol Cruz, co-owner of Revolution Ink, told the San Antonio Current Sunday afternoon. “The show was sold out and she already had all the booth fees from the artists. Where did all that money go?”

At 3 p.m. on Saturday, after asking Neilson for payment every hour throughout the day, an exercise that resulted in what Coben said was “not nearly enough” money to make her believe Neilson had any intention of paying up, security stepped in and asked her to leave the event center for “her safety.”

“People wanted their money and wanted to collect,” said San Antonio Park Police officer Brady Wise, who had one of his security officers remove Neilson from the venue. “I was afraid what would’ve happened if she had stayed. Everyone was very angry.” 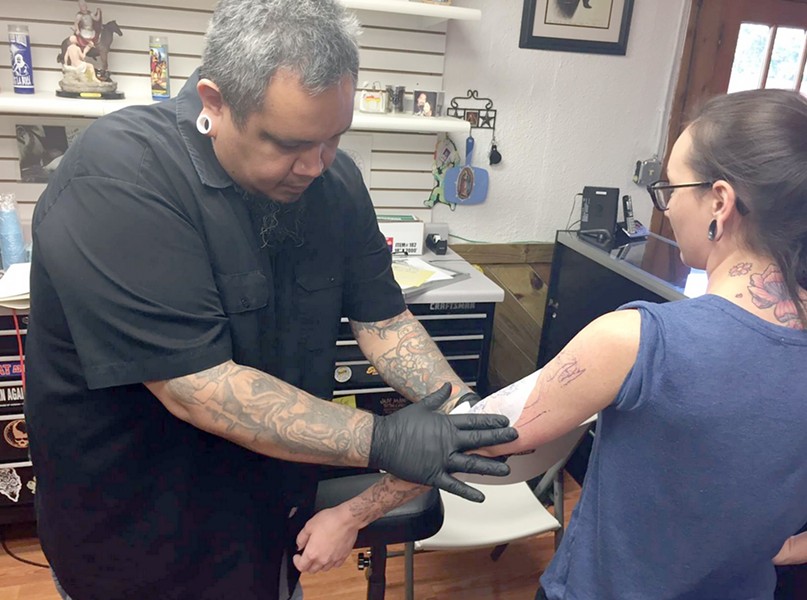 After Neilson left the premises, everyone involved attempted to make the best out of an awful situation by offering their services gratis and allowing the convention to finish up Saturday. Paul Zamarripa, owner of the event management company Total Media Solutions, said although Neilson still owed him $6,500, he agreed not to tear down the tables, chairs, and drapes they rented to her since it would not have been fair to the tattoo artists who did nothing wrong.

The final day of the Texas Tattoo Jam was cancelled Sunday. Neilson did not return the San Antonio Current’s phone call for a statement, but did text us her lawyer’s phone number. Her lawyer could not be reached for comment by deadline.

Tattooist Rick Rosas traveled with three other artists all the way from Orlando, Florida to be at the event. He said Neilson put them up in a hotel and then skipped out on the bill. The trip has cost him over $1,100 for just himself. Rosas had already booked clients for Sunday, but with the Jam cancelled, he had nowhere to tattoo. Lupe Diaz Jr., owner of Los Muertos Tattoo Company on Fredericksburg Road, invited Rosas to come over to his shop to work on Sunday to help recoup some of his losses.

“We lost out on a lot of money coming down here,” Rosas told the San Antonio Current on Sunday. “An experience like this kind of fucks it up when you think about going to any more tattoo expos in San Antonio. It leaves a bad taste in your mouth.”