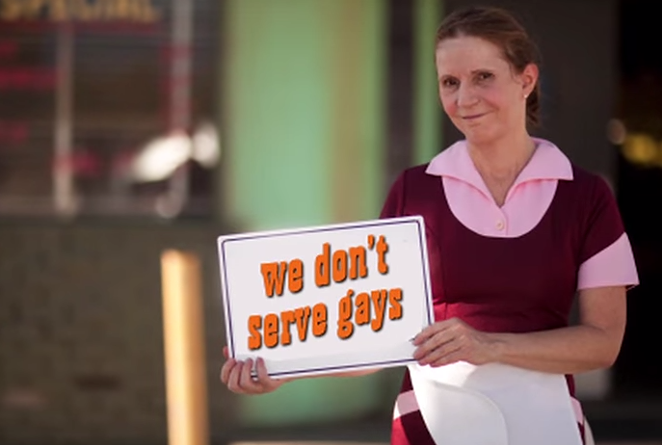 Much news has been made over the past weekend about Indiana's recently passed "religious freedom" law. The state's Religious Freedom Restoration Act, signed by Governor Mike Pence on March 26, gives business owners the right to claim religious grounds as a reason to deny service to a customer. Opponents assert the law protects businesses that discriminate members of the LGBT community, but Pence has played some impressive verbal gymnastics to avoid admitting the bill's anti-gay intentions.

"Tolerance is a two-way street," he said on This Week With George Stephanopoulos when pressed multiple times to clarify whether businesses would be allowed to discriminate gays and lesbians after the law goes into effect on July 1. Tolerance, by the way, is not a two-way street. Just ask any minority forced to tolerate discrimination.

As it stands, the law is frustratingly vague. The text says an individual's religious exercise cannot be "substantially burdened" by state or local governments. Apparently, the First Amendment of the U.S. Constitution isn't enough. You can read the full text here. The law currently does not define a standard for "substantially burdened." Courts may have to determine what those two words mean on a case-by-case basis, but it could allow businesses to deny service to gays, lesbians and transgender people. It may also override the five Indiana cities and two counties that already have LGBT employment discrimination protections on the books.

Pence told the Indiana Star that legislation would be introduced in the coming days  to "clarify" the law, although he declined to provide specific details.

The "religious freedom" law has sparked a number of strong reactions from the business community. Apple CEO Tim Cook, who is openly gay, criticized the measure in a Washington Post op-ed. Angie's List, an online business rating service that all NPR listeners are familiar with, cancelled a $40 million Indianapolis headquarters expansion in response to the bill's signing. The project, set to begin within days, would've created roughly 1,000 jobs. Meanwhile the internet has responded as it does best, with humor and mockery. Here's a video from Internet Action Force that calls out the law's intent.


Indiana's Religious Freedom Restoration Act has met a firestorm of criticism. But 20 states already have similar laws on the books — you can count Texas among them. Our state's law went into effect way back in 1999, two years after the U.S. Supreme Court overturned a portion of the Federal Religious Freedom Restoration Act that applied to state and local governments. (Incidentally, that ruling was made in a case involving the Archdiocese of San Antonio and the City of Boerne, something you can mention at parties.)

If the law has been on the books for years, what's the big deal? Well, when the federal law was passed in 1993, it was primarily motivated by a need to strengthen the legal protections for Native American tribes. Recent efforts to pass state "religious freedom" laws, however, are an evangelical conservative reaction to the tide of LGBT anti-discrimination laws and judicial rulings affirming gay marriage rights. They've taken the good intent of the legislation and mutated it to justify their hate, similar to what they did with the Bible.

The Supreme Court emboldened the right wing last year with the monumental Hobby Lobby ruling. After the court affirmed a company may deny contraception coverage to its employees due to religious objections, Justice Ruth Bader Ginsberg wrote in her dissent, "The court, I fear, has ventured into a minefield."

Well, welcome to the minefield.

Among those emboldened conservatives are Texas lawmakers looking strengthen the law. They want to make sure business owners can be absolutely assured they can discriminate against gays and lesbians without penalty. Sen. Donna Campbell (R-New Braunfels) — who some have described as "psychotic" and "bat-shit insane," but we won't because we're polite — filed SJR 10, which proposes a religious freedom amendment to the Texas Constitution.  Rep. Jason Villalba (R-Dallas) filed,HJR 55, a nearly identical amendment proposal in the lower chamber. Opposition from business leaders forced Villalba to pull the resolution, but Rep. Matt Krause (R-Fort Worth) revived the proposal.

The amendment reads like it was authored by a Southern tent revival preacher, rather than, say, a lawyer. Here's a portion of Campbell's version:

All men have a natural and indefeasible right to worship Almighty God according to the dictates of their own consciences. No man shall be compelled to attend, erect or support any place of worship, or to maintain any ministry against his consent. No human authority ought, in any case whatever, to control or interfere with the rights of conscience in matters of religion, and no preference shall ever be given by law to any religious society or mode of worship.

Both versions making the rounds at the State Capitol strengthen Texas' current "religious freedom" law by striking "substantially" from "substantially burdened." By removing one word, the could-be amendment pretty much eliminates any onus on the business owner to prove that their discrimination against LGBTs was motivated by religious belief, practically giving them free rein to cry "Jesus" to justify acts of intolerance.

But just in case any ambiguity existed in Texas' current "religious freedom" law or the proposed constitutional amendment, Rep. Molly White (remember her?) wants to make it absolutely clear businesses can discriminate against gays and lesbians in the name of religion. White's HB2555 plainly states businesses may refuse service to customers because of a "sincerely held religious belief or on conscientious grounds." Standards for "sincerely held" or "conscientious grounds" are not defined.

If any of these measures pass or are ratified into the Texas Constitution, they would override San Antonio's LGBT discrimination protections and similar ordinances across the state.

According to the Texas Observer, a record number of anti-gay proposals have been filed this session, at least 20 by their count, indicating republicans are preparing for what they may see as an inevitability: a Supreme Court ruling affirming marriage equality rights across the United States. Meanwhile, Attorney General Ken Paxton has sued the Obama Administration over an Family Medical Leave Act (FMLA) rule change that dictates federal and state agencies and private sector companies with 50 employees or more must offer paid medical leave to legally married same-sex couples. Last Thursday, a federal judge temporarily blocked implementation of the rule change.

Don't expect these anti-gay legal fights and "religious freedom" measures to leave the headlines any time soon. Lawmakers and state leaders can and will continue to propagate this government-sanctioned, anti-gay bigotry until federal civil rights legislation is updated to give "sexual orientation" and "gender identity" protected class status.

But since it may be a while before that happens, make yourself at home here in the minefield.