Is Anyone More Hated Than Yolanda Saldivar? 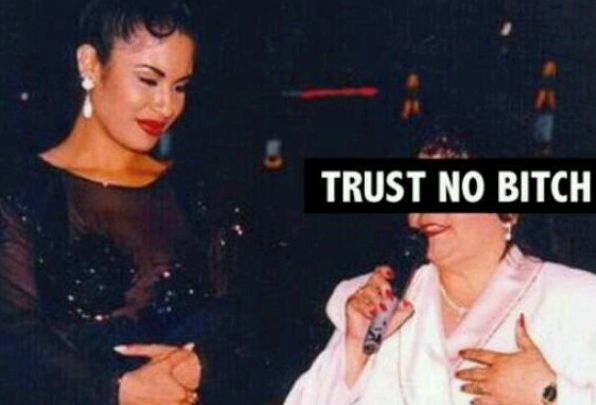 Today, the world remembers Selena Quintanilla, the radiant angel and embodiment of all that is pure and good who enchanted fans with her life-giving gift of cumbia. Monday marks the 20th anniversary of Selena's death, a life tragically cut short just two weeks shy of her 24th birthday. Fans are reflecting on the legacy of Selena and her music, honoring the South Texas icon with an outpouring of love and admiration.

Selena is as close as one can get to being universally loved. But Yolanda Saldivar, the vile, traitorous monster who murdered the shining light of South Texas? The amount of rage and vitriol directed at the former Selena fan club president is seemingly unmatched. Even Hitler continues to have supporters.

You see, Yolanda Saldivar didn't just take Selena's life; she also took away our humanity. Simply mention her name or splash her stupid, repugnant face on a screen, and fans respond with unconstrained rage. All sense of compassion and basic humanity is thrown right out the window.

Much of the hatred is motivated by Saldivar's refusal to admit guilt, even to this day. But every Selena fan and their sancho knows Saldivar embezzled money as manager of Selena's boutiques, lied about a rape to avoid admitting her ongoing theft, and when that didn't work, pulled out a gun and shot Selena without hesitation. Still, Saldivar did the full court press to assert her innocence.

When a conservative parody site claimed Saldivar would be released from prison, fans responded on social media with a tidal wave of vitriol and violent threats that would be considered unnerving were they directed at absolutely anyone else.

"Yeah let her out and drop that marrana off right in the middle of downtown Fiesta," read one comment on the San Antonio Current Facebook page.

"She won't make it out in the free world, someone's gonna catch her ass slippinnnn [sic]," posted another reader.

"The bitch needs to burn...let her rot in prison."

Today, reactions toward the convicted killer have not softened, as you can see below.

Selena died 20 years ago today😔 all I have to say is fuck you Yolanda saldivar die bitch... #RIPSelena

Before I forget. Fuck you, yolanda saldivar. #20AñosSinSelena

Happy National Fuck Yolanda Saldivar and If I Ever See That Bitch, I’mma Stab Her In the Esophagus Day http://t.co/hkb1hjm2xf

http://1994eo.tumblr.com/post/7729288927
Saldivar is eligible for parole on May 30, 2025. But much as the love for Selena grows over time, so does the intense animosity for the heartless beast who murdered here, so there's little chance people will forget what she did over the next ten years.