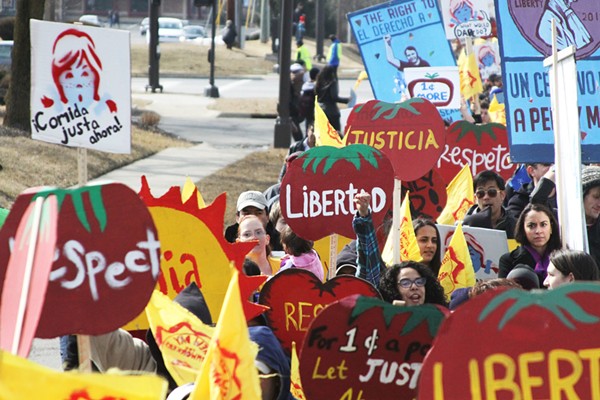 Natali Rodriguez of the Student Farmworker Alliance contacted the San Antonio Current on behalf of the Coalition of Immokalee Workers to clarify the latter group's position regarding Wendy's. Rodriguez says the CIW, described in press materials as "a model for how the U.S. can end slave labor," cannot make the claim that Wendy's condones modern-day slavery, because it has no knowledge of the chain's suppliers.

The CIW is not able to claim that because they do not have access to the list of Wendy's suppliers. Therefore, there is no way that the CIW is able to verify that Wendy's' business promotes such activity.

The Esperanza Peace & Justice Center will be screening Food Chains, a thought-provoking documentary about our food supply's human costs, April 3 at 6 p.m.

Once the film ends, all attendees will be encouraged to march to the Wendy's located at 430 San Pedro to protest the company's refusal to be part of the Fair Food Program, an initiative that ensures farmworkers are treated with dignity and respect, and not like modern day slaves. The program creates an alliance between farmers, farmworkers, and food corporations to provide better wages, and better working conditions for America's poorest laborer.

The documentary follows the Coalition of Immokalee Workers (CIW) through their struggles on tackling $4 trillion corporations to ensure that farmworkers are protected from the adversaries of working on the field, such as forced labor and sexual harassment. They have achieved one of the greatest human rights feat in this century with the conception of the Fair Food Program. It is important that all food providers join the cause so that the (CIW) through the Fair Food Program can continue to have surveillance and constant audits to ensure that the farmworkers are not being mistreated.


By Wendy's refusing to sign the program gives the company a bad image as they would only be paying a cent more per pound, and they are also denying farmworkers a higher standard of living. It's shocking how greedy food corporations can be, and the CIW alleges Wendy's supports modern day slavery by not joining the cause.

Interesting enough McDonald's agreed to join the program, and is now according to the (CIW) increasing the wages of the farmworkers. This is a breakthrough for for farmworker wages as they tend to hover around $5.00 a day according to OXFAM America. Of course that's if they provide the sufficient tons of tomatoes. We all know that earning $5 a day gets no one anywhere. So if you have it in your heart make time to go to The Esperanza Center and join the cause.