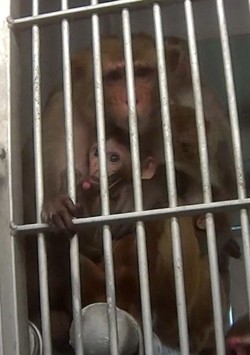 After repeated federal violations and five fatalities, the United States Department of Agriculture has opened an investigation into the Texas Biomedical Research Institute.

An email between the USDA and the national animal rights watchdog Stop Animal Exploitation NOW! (SAEN) obtained by the San Antonio Current confirmed the investigation.

Details are scant, but SAEN Executive Director Michael A. Budkie said he thinks the investigation was prompted by multiple complaints the group has filed with the USDA since January 2014, when an infant primate was crushed to death at the facility. Another primate was crushed last September.

Three other monkeys died from strangulation and another died from blood poisoning it contracted from trauma wounds, possibly from being attacked by other primates.

"Negligence at the Texas Biomedical Research Institute has now killed five monkeys through strangulation, trauma, and being crushed," Budkie said in a press release. "This facility deserves the maximum penalty allowable under the law.

According to a letter from the USDA to Texas Biomedical Research Institute from December 2011, the federal government believed the facility violated the Animal Welfare Act three times between November 30, 2009 and May 10, 2010.

Those violations included failing to securely prevent animal enclosures from opening. A juvenile rhesus macaque escaped its cage in a weakened condition and spent the night outside. It had to be euthanized, documents show.

The lab was also cited for its handling of animals after two baboons escaped enclosures in May 2010 and injured an employee, documents show.