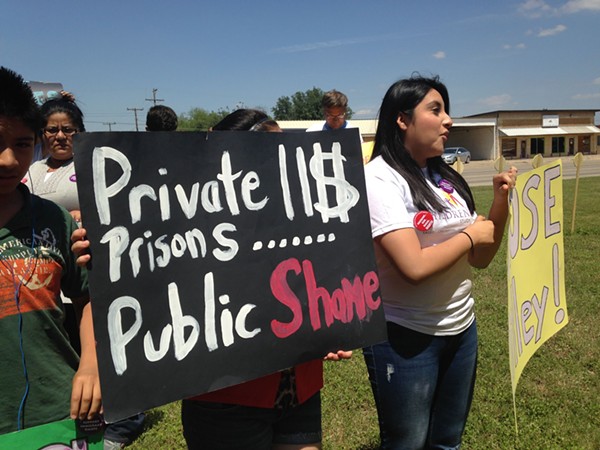 It is May 2, 2015 and I traveled to Dilley, Texas with five other students and two of our professors from Our Lady of the Lake University in San Antonio. Earlier this week, I attended an information forum on campus in which two activists, Rebecca Flores and Diego Mancha, who are active in the movement to free the women and children imprisoned in "residential centers" in Karnes and Dilley spoke about what they had witnessed first-hand in these camps. They talked about how the mothers and children were suffering due to the uncertainty of their situation and the long days spent waiting to be released and possibly deported back to the places they are fleeing. We learned about how some of the women started a hunger strike during Holy Week to pressure ICE to release them for the sake of their children. Prison is no place for children. Children belong in school, not in jail. I was stunned into action, as were many of the other students who attended the forum. So, we joined the caravan to Dilley.

When we arrived at park near the Dilley City Hall, the rally was in full swing. It was amazing to see so many people there from all over Texas and from other states such as New Jersey, California, Iowa, New Mexico and many other places. I had not realized until then, that the movement to end family detention is a national movement that extends beyond Texas. It literally brought tears to my eyes to see how many people care about this issue. What really moved me was that there were all kinds of people there — young and old, of different ethnic and racial backgrounds, and different religions. There were community organizations holding up their colorful banners and college students like me — all coming together for the same cause to fight for the freedom of these families. I learned at the rally that the majority of the families who are imprisoned are refugees seeking sanctuary in the United States. They have legitimate asylum claims, but our government has callously decided to treat them as criminals.

The park was full of energy and inspiration. A son jarocho group sang protest songs, people held up their homemade posters and signs. One of my favorite slogans read, "Children need freedom and sunshine to grow." Referring to the fact that these detention centers are run by private corporations, one woman held I poster that said, "Private prisons, public shame!" My sign had a painting of the Virgin of Guadalupe on painted on the front. In the back, it reminded us to pray for the women and children in detention.

After the rally we walked about a mile and half in the blazing sun, changing at the top of our voices in Spanish and in English, "We want justice now! Shut them down!" When I thought it was too hot, or the distance daunting, I would look at the amputees from Honduras and El Salvador who were leading the march, walking on crutches and with prosthetic limbs. La Bestia mangled these men. The screeching trains that migrants ride atop the boxcars through Mexico in hope of finding work in the United States.

Walking along the highway to the detention center, huge trucks carrying oil or supplies for the refineries sped by us, the tires kicking up the dust in our faces. I met a young man named Cristian on the march who works in the oil refineries in Karnes, Texas, where the other detention center is located. He told me that he often sees women and children dismounting the buses to the detention centers on his way to work. When the oil industry was booming, many immigrants from Guatemala, Mexico and El Salvador were hired to work in the refineries, but when the market started to plummet they were all fired. "Now, only US citizens are working in these jobs," he explained.

As we passed the entrance to the detention center, we noticed a large billboard, "Sandero Ranch workforce housing for lease." We both were struck by the connection between the oil industry and immigration. Not only is the detention center located in remote locations near the oil refineries, the immigrant workers like the detainees, are expendable. Even the "workforce housing" leased to the oil industry to house their workers can be converted in to prison camps for women and children. These connections made visible how globalization and undocumented migration intersects with corporate interests and the politics of national security in Dilley, Texas.

We were not allowed to enter the grounds of the detention center. Our march ended along the fence that surrounds it. People shared water and snacks and listened to speakers whose lives have been impacted by deportation or family detention.

One of the speakers, Sabuki Ina, was born in a Japanese internment camp. She spoke about how similar the injustice that is being committed today is to the injustices Japanese-American suffered citizens during WWII. "The government still has not learned from the mistakes of the past," she said. Ina also told the captivated crowd that the internment camps existed for three main reasons: racism, wartime fear, and political and corporate interests.

Regardless of their nationality, people do not deserve to be imprisoned. No one deserves to be subjected to the pain, misery, and the psychological damage that these families are enduring right now. One of the most powerful words came from Melanie, a four-year-old child who was detained with her mother in Karnes. In her tiny, yet brave voice she talked about seeing her mother cry everyday and expressed her concern for her friends she left behind in the Karnes detention center. "I want all the children to be free," she said. Children like Melanie know things that no child should ever have confront. Words like "deportation," "ICE," and "detained," should not be part of a child's vocabulary or first-hand experience.

From my classes in religious studies at Our Lady of the Lake University, I have learned about Catholic social teachings such as the dignity of the human person and also what scripture tells us about welcoming the stranger and helping the poor. Our government is violating the human rights of people seeking asylum and when these rights are violated, we have to take a stand. We have to speak out and march in solidarity with those who are not being heard. It is time for everyone to know about the injustices happening in these detention centers.

Mendoza, Alexandra Burrones, Agatha Calica, Abigail Garcia, Nora Grimaldo and Aimee Villarreal contributed to this essay. They formed a delegation from Our Lady of the Lake University to attend the march.