Back From The Dead: OLLU Relaunches Mexican American Studies Program 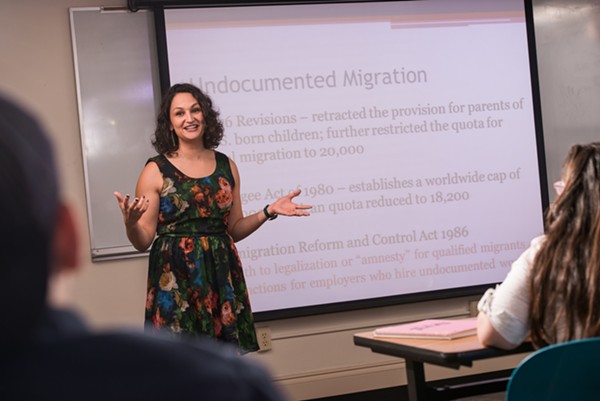 It seemed for years that it was bound for extinction. Put on its death bed, it was all but gone.

Then a surprising move saved it, though basically it was left on life support.

Now supporters are keeping their fingers crossed for a full-fledged revival.

That's precisely Aimee Villarreal's goal. The anthropologist has been tasked by Our Lady of the Lake University to bring back and grow its all-but-defunct Mexican-American Studies program.

She has come up with a plan, which has been already approved by her peers and now awaits final approval by the university's board of trustees, expected later this month.

The program, officially a bachelor's degree in Comparative Mexican American Studies, seeks to balance the old with the new. Assuming it gets the green light, it'd officially launch this fall semester.

"Our goal was to honor the legacy and active spirit of the discipline, while making modifications that are responsive to a new generation of scholars who are living in an increasingly globalized and interconnected world," said Villarreal, who was hired last year.

The new program is slated to offer concentrations in either Cultural Studies, leaning toward the arts and humanities, or in Social Transformation, which takes more of a social science approach and which will be also offered as a minor.

Planned new courses include: Barrio Art and Popular Culture, Borderlands and the Black Atlantic and Voices of Women of Color.

Ultimately, the objective is to help create the next generation of national Latino leaders.

"I congratulate Dr. Villarreal and OLLU for developing a program that can help students build intellectual capacity and appreciate the value of developing strategic alliances to advance social justice and ethical decision in the 21st century workforce," said Michael Laney, dean of the College of Arts and Sciences.

The roots of the program date back to the Chicano civil rights movement in the 1960s and 1970s. It was Mexican-American students, faculty and members of SA's immigrant-heavy West Side, in which the campus is located, who called for the creation of the program. That was in 1971. It led to two new courses, though the major wasn't offered until the 1990s.

But it has been far from easy sailing for the program. It suffered from chronic low enrollment. Then, in 2012, after graduating just two students in nearly a decade, Tessa Martinez Pollack, then the university's president, decided to include it among a dozen programs to be nixed. Students and professors immediately protested the move, in part leading to Pollack's eventual departure.

So the Mexican American Studies program essentially sat in a vegetative state until last year, when new President Jane Ann Slater gave it new life, taking it back from the list of majors to be eliminated. She concluded it deserved another shot.

"Mexican-American Studies, that's kind of core to who we are, and we hope that the Mexican-American Studies program will be collaborative, will be an interdisciplinary reality with maybe sociology, psychology, social work," Slated said, according to the San Antonio Express-News. "We live right here on the West Side. We have such rich possibilities here."

So, the program is basically now back from the dead. The question now will be whether it'll once again fall into a desolate no-man's land or if it will draw new interest and attention and reach a competitive level on par with similar academic efforts at other area and state universities.