Down But Not Out: Mike Villarreal Weighs Next Move 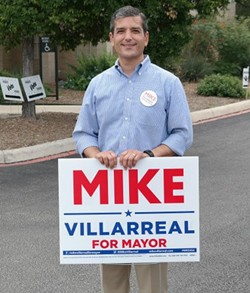 He's not saying yet what's next, but former mayoral candidate Mike Villarreal made it clear that he's not simply going to fade away from the political spotlight.

Villarreal came in a disappointing third in Saturday's election, leaving him out of the race.Top vote-getter Leticia Van de Putte and current interim Mayor Ivy Taylor will duke it out in a runoff election set for a month from today (June 13).

It was but a foregone conclusion that no single candidate would win the race outright and that it was bound for a runoff.

And though Van de Putte had led most polls and Taylor wasn't gone, many thought the runoff would have included Villarreal, who had stepped down from his state representative's seat to solely focus on the SA mayoral campaign.

So what now for him?

In a message to supporters posted on his Facebook page, Villarreal made it clear that he may be down, but he's not out.

"Saturday’s election results have not diminished my call to public service," he affirmed. "I’ll find new ways to help improve my community." He didn't specify what he plans to do nor what options he's weighing.

We'll have to stay tuned for that.

Meanwhile, it also remains to be seen if he'll endorse Van de Putte or Taylor. Or if perhaps neither. But just as much as he's not planning to stay far from the political limelight, he encouraged his supporters not to walk away from the ballot box.

"This journey we’ve been together on isn’t over," he posted on Facebook. "Our city needs us to vote in the runoff and make our voices heard."