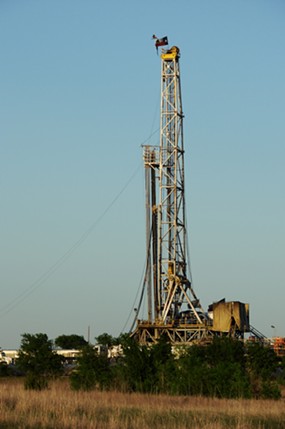 In one of his early acts as Texas Governor, Greg Abbott made it a point to protect the oil and gas industry from pesky cities who say "not in my backyard!"

And it's all Denton's fault for standing up for itself.

On Monday, Abbott signed House Bill 40, which pre-empts city level oil and gas regulation by giving the state the authority to regulate the natural resources, which it already had. This bill just says it explicitly.

"HB 40 does a profound job of helping to protect private property rights here in the State of Texas, ensuring those who own their own property will not have the heavy hand of local regulation deprive them of their rights. This law ensures that Texas avoids a patchwork quilt of regulations that differ from region to region, differ from county to county or city to city," Abbott said in a press release. "HB 40 strikes a meaningful and correct balance between local control and preserving the state's authority to ensure that regulations are even-handed and do not hamper job creation."

However, in the last century, the Lone Star State saw more than 100 earthquakes in 40 of the state's 257 counties, according to the University of Texas Institute for Geophysics.

But scientists have recognized human-induced earthquakes are real and may be caused by oil and gas activity.

"Of course, it is seldom possible to prove unequivocally that any particular earthquake is caused by humans. However, in some parts of Texas the majority of earthquakes epicenters occur near active petroleum fields or injection wells," the UT Institute for Geophysics wrote on its website dedicated to Texas earthquakes.

The authors say a vast majority of earthquakes aren't caused from oil and drilling, but the ones those that are are small and harmless.

Frack Free Denton, however, says fracking decreases residential property values, makes getting a home mortgage and insurance more difficult, and causes health problems, along with a myriad of other reasons, including human-induced earthquakes.

That's why they didn't want fracking in their backyard.

Adam Briggle, president of the Denton Drilling Awareness Group (they are responsible for the Frack Free Denton campaign), blasted the bill in a guest column for the Denton Record-Chronicle.

"Yes, HB 40 has been called 'the Denton fracking bill,' but this isn't about Denton. This is the culmination of years of frustration by an industry thwarted by a legal tradition that prioritizes community health over profit maximization," Briggle wrote. "The industry only used the shock of the Denton ban as a lever to align the law with their interests."