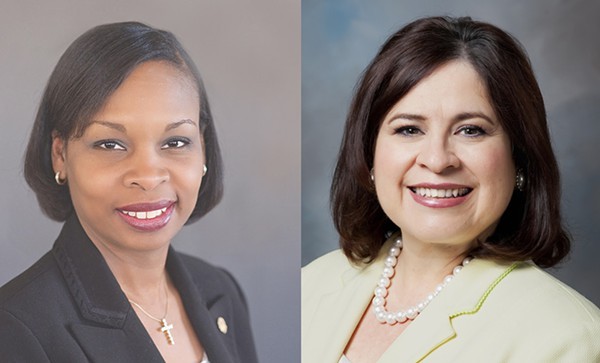 Announcing an endorsement makes for a nice press release. But what will those seals of approval be worth come Election Day?

Quite a bit, according to St. Mary’s University political science professor Arturo Vega.

Vega, who studies San Antonio politics and Latino elected officials, said that in local elections, voters “rarely drill down” to study a candidate’s position on specific issues. Instead, they consider more where the candidate is from and who endorses them.

Local elections in San Antonio are officially non-partisan. That means that for SA voters (who are evidently an endangered species, according to turnout results), a candidate’s endorsements could be more valuable than in a statewide or local election.

“Any voter looks for cues as to does this person align with my values,” Vega said. “You’ve got to do all the right stuff, and [endorsements] are part of the right stuff.”

This week, she ran up the score even more — on Taylor’s home turf, no less.

Warrick represents the seat that Taylor vacated to take the mayoral job, and had sharp words for his predecessor.

“We need Leticia Van de Putte at City Hall. For 24 years, Leticia has delivered results for San Antonio, passing legislation to help our children, families, and veterans. Her opponent in the race, Interim Mayor Ivy Taylor, has failed our community and failed to make meaningful investments in District Two,” Warrick said in a press release.

Justin Hollis, Taylor’s campaign manager, responded in a statement that “Mayor Taylor helped bring over half a billion dollars in investments to the East Side both as the District 2 City Councilwoman and as Mayor. Alan Warrick's greatest accomplishment is to propose that the city regulates the sale of used mattresses.”

“It comes as no surprise that aspiring career politicians with grandiose ambitions want to maintain the status quo so they can collect on whatever Leticia Van de Putte has to offer,” Hollis said.

But the biggest fish in the endorsement pond is still Villareal himself. He narrowly missed the runoff with 26 percent of the vote, and his endorsement could swing the race for either candidate.

But neither Taylor nor Van de Putte will get it.

Villareal released a statement this morning that didn't express support for either candidate, instead counseling voters "to select the candidate who best upholds the principals that our campaign stood for," listing financial responsibility, equality, and embracing innovation and technology.

"Our campaign was a unique mix that spanned political parties and brought together fiscal conservatives and social liberals. Listening to these passionate voices has convinced me that each and every one of them is capable of making a smart decision about who to vote for. They won’t all vote one way, and they don’t need me to tell them how to vote," Villarreal said in the statement.


Taylor and Van de Putte will debate twice more before the June 13 runoff: