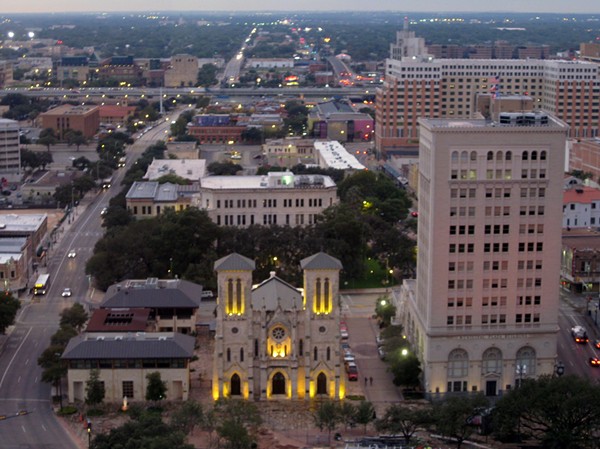 If San Antonio City Council approves a complicated deal to make way for a new downtown skyscraper on Thursday, Main Plaza and the San Fernando Cathedral may have new neighbors by 2023.

The proposed public-private partnership between the City of San Antonio, Frost Bank and Weston Urban LLC not only paves the way for the Alamo City's first downtown skyscraper since 1989, it would also consolidate city staff into one office tower and create 265 housing units in the Central Business District.

Here's how this will work, according to the pending comprehensive development agreement that will be considered — along with a bunch of related items — at the City Council meeting later this week.

San Antonio will pay $51 million to purchase the 22-story Frost Bank Tower at 100 W. Houston Street. This is where city staff will operate.

According to an assessment performed on the building, $6.7 million in improvements are needed since the city will renovate 50 percent of the building.

A short jaunt down the way — at the corner of Houston and Flores — Weston Urban LLC will build a new 400,000-square-foot skyscraper where Frost Bank will operate.

The city will then declare that the San Fernando Gym at 319 W. Travis, the Municipal Plaza Building at 114 W. Commerce and a parking lot on N. Flores are surplus property and sell them to Weston Urban.

This means new neighbors for the San Fernando Cathedral and Main Plaza.

The historically significant Municipal Plaza Building is where City Council meets. Under the terms of the proposed deal, the city would retain control of the first floor and Weston Urban would buy the rest of the property for just over $5 million.

The 12-story tower was built by Frost Bank in 1922 to serve as its headquarters. In 1973, the corporation moved to its current spot on Houston Street, which the city plans to purchase. In 1992, City Council voted to move its chambers into the building.

According to the proposed agreement, Weston Urban will develop floors two through 11 into retail and residential units.

The other two properties — a parking lot and the San Fernando Gym — would also be sold to Weston Urban for approximately $1.3 million.

Consolidating city staff will result in $1.2 million in net savings over a 30-year period, according to the city, which states in the proposal that it spends $3.8 million annually leasing office space in five buildings.

If City Council approves the deal Thursday, a 12-month design effort for the new tower will start with construction anticipated to being in fall 2016 with a possible completion date in spring 2019.

In 2020, the city will move into Frost Bank Tower and after that, Weston Urban will move into the Municipal Plaza building with an anticipated completion date for the retail and residential units landing in spring 2023.

Here's a copy of the comprehensive development agreement: