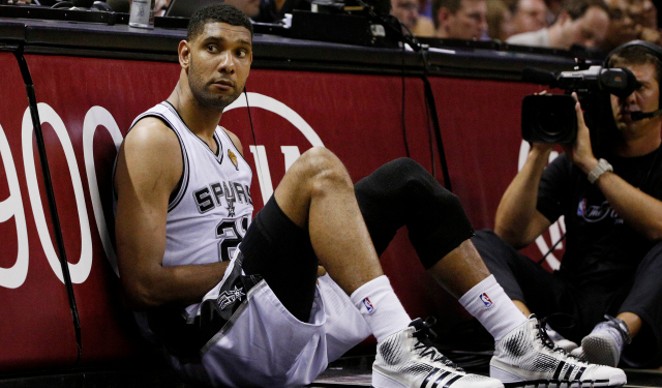 On this day one year ago, Tim Duncan and the Spurs routed the Miami Heat in Game 3 of the NBA Finals, 111-92. It was an objectively beautiful display of basketball — particularly the first half, when the Spurs shot over 75 percent from the field.

Today Duncan is going to court again — this time to reclaim money he says his financial advisor owes him.

Duncan sued Charles Banks in January of 2015 for $1 million in damages, claiming that Banks “committed egregious breaches of his trust relationship with Duncan.”

The crux of the suit hinges on a $7.5 million loan Duncan made to Gameday Entertainment, which Banks chaired.

The suit claims that, unbeknownst to Duncan, Banks held on to 20 percent of the loan as a fee. Gameday missed some payments to Duncan, but even those that it did make were 20 percent lighter than they ought to have been, since that money allegedly went straight to Banks.

Today’s hearing is on a motion filed by Banks to move the suit’s venue to either California or Colorado, according to the San Antonio Express-News.

Duncan has made over $220 million in salary before taxes, and millions more in endorsements from companies such as Adidas and H-E-B.

Here is the full text of Duncan’s original filing: