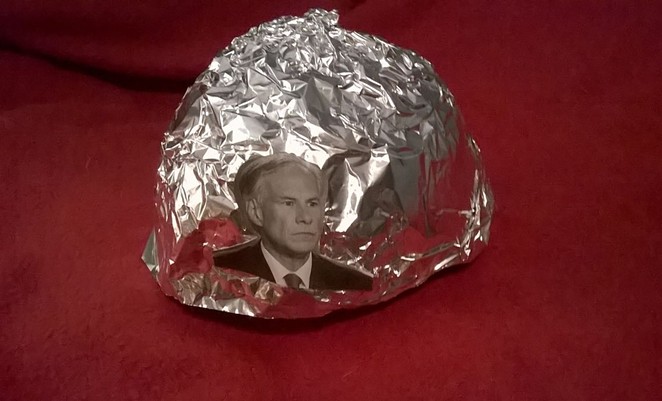 Instead of verbosely exploring the intricacies of lunacy, the concerned citizens simply sent the governor aluminum foil.

We know this because Gawker reporter Sam Biddle says he filed a Freedom of Information Act with the governor's office seeking emails about Jade Helm 15.

The catalyst was Texas Gov. Greg Abbott, who indulged his state’s paranoid population by ordering the Texas State Guard to “monitor” the U.S. Army. After his announcement, I submitted a Freedom of Information Act request to his office for emails pertaining to Jade Helm (I can’t keep putting that in caps), and received hundreds of pages of emails from furious constituents, xenophobes, conspiracy theorists, and manic caps-lock devotees.

Surprisingly, the bundle contained at least as many Texans who were disappointed and even disgusted by Abbott’s decision to pander to the country’s most deluded bunch. Together, they provide a rich portrait of American paranoia today.


Our favorites, again, the tin-foil geniuses, actually sparked an internal memo, prompting a search for any campaigns to mail the governor foil. They didn't find any.

There were a whole lot of letters, hundreds of pages, but Gawker was nice enough to post a few of the letters, which range from delusional to hilarious.