June 18, 2015 at 3:29 PM
comment
The U.S. Treasury Department announced yesterday that starting in 2020, Alexander Hamilton will share the $10 bill with a woman.

It's the first time in over 100 years that a woman will appear on U.S. paper currency. The Treasury Department is open to suggestions for who to honor, so it got us thinking — which women from the Alamo City could grace the $10 note?

Here are ten San Antonio women for the $10 bill. Since there's no precedent for living people on U.S. currency, we did not consider anyone who's still alive. Research for this story was conducted through the Texas State Historical Association.

Brackenridge was a leader of the women’s suffrage movement in Texas, and co-founded the Woman’s Club of San Antonio. After Texas ratified the 19th Amendment, Brackenridge became the first woman in San Antonio to register to vote. 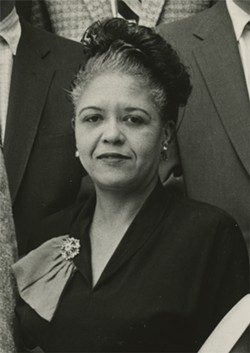 Briscoe was the first black woman to practice law in Bexar County. She graduated from St. Mary’s School of Law in 1956, and established her own firm. A former cosmetologist and cosmetology teacher, she was fired from Wheatley High School for “sassing white folks.”

We have De Zavala, granddaugther of Lorenzo de Zavala, the first vice president of the Republic of Texas, to thank for the preservation of the Alamo. De Zavala was instrumental in securing the property from a local grocer. She went to extreme lengths to protect the Shrine, as the Texas Historical Commission tells it: “In 1908, upon hearing that the 2-story long barracks were about to be razed, Miss Adina barricaded herself inside the buildings for three days and nights in an effort that ultimately prevented their destruction.”

Dubbed "San Antonio's First Lady of Song" by Lady Bird Johnson, Fernandez won a singing contest in 1932 sponsored by WOAI. She later recorded jingles for commercials, before cutting hundreds of records and appearing in feature films, including the 1960 version of The Alamo. For decades, Fernandez also headlined Fiesta Noche del Rio, and A Night in Old San Antonio.

Hemmings was a teacher and actress, but she’s perhaps best-known for founding the Delta Sigma Theta Sorority, now the largest black Greek organization in the U.S. Hemmings founded the group in 1912 at Howard University in Washington, D.C. After returning to San Antonio, she acted in local theater productions and three movies.

One of the preeminent activists and organizers of the early 20th century, Idar was born in Laredo, and moved to San Antonio in 1921 with her husband, Bartolo Juarez. Idar wrote and edited for several Spanish newspapers in South Texas. As a reporter, she exposed poor living conditions and discrimination against Mexican workers in Texas. She also helped found and lead the League of Mexican Women, which provided free education to Mexican children, and organized around other social issues.

Niggli came to San Antonio from her home in Monterrey early in life to escape the Mexican Revolution. Travelling between the two cities, she started writing as a teenager, eventually producing Mexican Silhouettes, her first book of poetry. The Mexican-American tone of her work, which included plays, radio and television shows, and novels, laid groundwork for subsequent generations of Latin American artists.

Porter is a long-shot, as it’s unlikely that the U.S. Treasury Department would approve putting the proprietor of a brothel on official currency. But it’s undeniable that Porter was one of the most enterprising and colorful characters ever to grace the Alamo City. Originally from England, Porter was the long-time madam of a “boarding house” at the corner of Durango and South San Saba. Porter’s brothel was a favorite pit stop of the “Wild Bunch,” a notorious gang of western outlaws whose ranks included Butch Cassidy and the Sundance Kid. The circumstances surrounding Porter’s death are hazy, though she’s rumored to have died in a car accident in El Paso.

At a time when flying a plane still seemed like a space-age novelty, Stinson was one of the nation’s most famous stunt pilots. Just the fourth American woman to earn her pilot’s license, Stinson and her family moved to San Antonio in 1913 to open a flight school. Stinson’s list of aviation “firsts” is astonishing: first woman to perform a “loop-the-loop” stunt, first person to fly in Japan, first person to fly at night, first woman commissioned as a mail carrier pilot. Stinson Municipal Airport in San Antonio is named for Stinson and her family.

Tenayuca started her career as a labor and civil rights activist at 16, when she joined a group of picketing cigar factory workers. A San Antonio native, she’s best-known for her role in organizing a pecan shellers’ strike. Tenayuca was one of thousands arrested in the 37-day strike, which was organized over a cut in wages. Tenayuca later became a teacher in the Harlandale School District.