Unlucky And Locked Up At The San Antonio Zoo 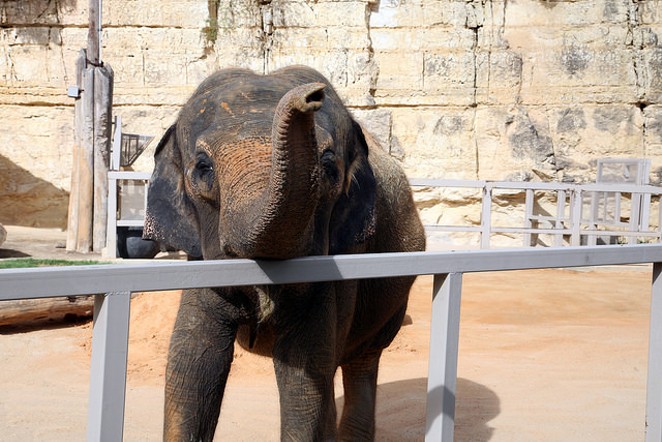 And both organizations disagree on the facts.

While not explicitly calling out One World Conservation, the zoo created welovelucky.com to counter what the zoo calls inaccurate information.

Our mission goes beyond this when it comes to our animal collection, especially elephant care. The Zoo's Asian elephant Lucky has generated an onslaught of inaccurate information. Because we passionately care for her, I'd like to take this opportunity to share a few crucial, but most importantly, true facts.

Lucky is most fortunate to have the intense care of a professional staff with over 100 years of combined experience in biology, animal husbandry, and elephant management.


One World Conservation, which created weloveluckymore.com in response to the zoo's website, sent out a press release disputing the zoo's experience in elephant management.

Since 1925, the San Antonio Zoo has had 12 elephants — Cindra, Romero, Babe, Watti, Motti, Ginny, Belle, Alport, Missy, Wanda, Boo and, of course, the aging Lucky. One World Conservation says it conducted extensive research and found that all of those elephants were mistreated. You can read the press clippings here.

“They were not meeting the needs of the species then, and they are not meeting the needs of the species now. The articles show how horribly the elephants have been mistreated throughout the years. This is not the first time the San Antonio Zoo has been surrounded by controversy,” Karrie Kern, CEO and Founder of One World Conservation, says in a press release. “We are bringing this information to the forefront today because we don’t want these elephants to be forgotten. Their lives mattered then and they matter to us today.”

Kern says Lucky should spend her golden years at the refuge in Tennessee, but the zoo says the move is too dangerous. According to One World Conservation, the fact that Lucky is alone in a small enclosure that doesn't even have grass is also a major stress and moving Lucky, while it would be a stress, is a better trade-off than Lucky's current situation.

More and more research is pointing out that elephants are intelligent creatures that probably shouldn't be incarcerated in zoos, as the Scientific American points out.

Because of recent experiments designed with the elephant’s perspective in mind, scientists now have solid evidence that elephants are just as brilliant as they are big: They are adept tool users and cooperative problem solvers; they are highly empathic, comforting one another when upset; and they probably do have a sense of self.


And that's why they shouldn't be locked up.

At least a few zoos are using the latest science to transform their elephant enclosures, giving the animals more room to roam as well as intellectually stimulating puzzles. Only some zoos can afford to make such changes, however, and many elephant experts maintain that, given everything we know about the creatures’ mental lives, continuing to keep any of them locked up is inexcusable.


Even the "Greatest Show On Earth" gets it, as the New York Post reported in March. That's right, the Ringling Bros. and Barnum and Bailey Circus announced that due to a changing attitude among its customers, who were uncomfortable with captured elephants being paraded around for show, it would remove 13 elephants by 2018 and move them to a conservation area by Orlando, Florida.