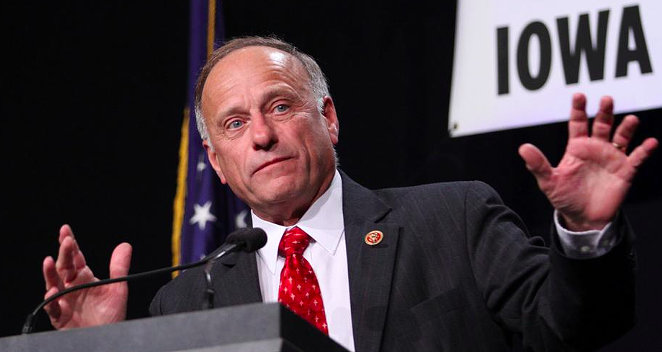 What does Julian Castro know? Does he know that I'm as Hispanic and Latino as he? pic.twitter.com/CYmNIdyqLW

The first question is interesting. What does Julian Castro know? Could be the start of Dr. Seuss-esque book. Maybe Castro could talk to the same people who put together Sen. Ted Cruz's coloring books.

The second question is absurd but easily answered: No. He doesn't know it, because that's not the case.

Not only is King not Hispanic or Latino (good thing you had both of them in there for good measure, Steve), he's done everything he can to alienate that demographic.

In July 2013, King said in an interview with the conservative site Newsmax that for every valedictorian child of illegal immigrants "there's another 100 out there that weigh 130 pounds and they've got calves the size of cantaloupes because they're hauling 75 pounds of marijuana across the desert."

At the Iowa Freedom Summit in January, an event which King hosted, he said that "across the street, those people that come from the other planet,” referring to a group of immigration activists protesting outside the event, according to Politico.

And after the 2015 State of the Union Address, he tweeted that First Lady Michelle Obama had invited a "deportable" to sit with her. Obama invited 20-year-old DREAM Act beneficiary Ana Zamora of Dallas to the address.

Could be that King is also accusing Castro of not being very Latino. But just to recap in case there's confusion: no, King is not as Latino as Mexican-American, son of a La Raza organizer Castro. Glad we've cleared that up.