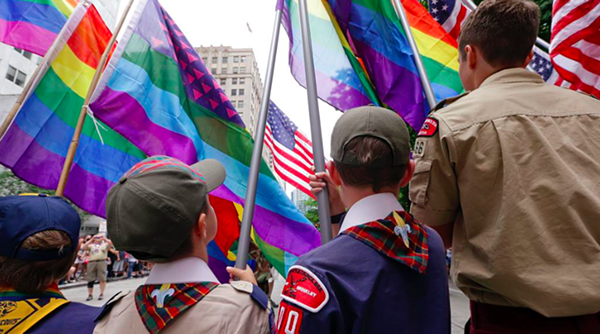 The Boy Scouts of America will no longer ban gay adults after its National Executive Board ratified new membership standards yesterday by a 45-12 vote, according to the Associated Press.

But the move is still a major step forward for an organization that’s come under heavy fire for its membership policies. Zach Wahls, executive director of the advocacy group Scouts for Equality, called the vote “the beginning of a new chapter for the Boy Scouts of America.”

“While we still have some reservations about individual units discriminating against gay adults, we couldn’t be more excited about the future of Scouting," Wahls said in a news release. "As of this vote, the Boy Scouts of America is an organization that is looking forward, not back."

Momentum for the move had built since at least 2013, when the BSA voted to allow gay youth in the organization. BSA President Robert Gates, the former secretary of defense, said in a speech earlier this month that if the group failed to make such changes on its own, it would likely be forced to do so down the road.

“We must deal with the world as it is, not as we might wish it to be. The status quo in our movement’s membership standards cannot be sustained,” Gates said.

BSA executives will now try to mend fences with former members and corporate sponsors who fled after the group stuck by its previous policy of excluding gay adults.

Troop 512 in Converse denied membership to a lesbian couple, Adella Freeman and Barbara Wright, earlier this year. Nick Zamora, Wright’s 15-year-old son, had almost attained the rank of Eagle Scout, the organization’s highest honor. But Zamora quit the troop after his mother was banned.

Freeman told the San Antonio Express-News that the new policy was “a step in the right direction,” but had reservations about allowing faith-based troops to still exclude gay adults.

“Unfortunately, they’re not going to be completely inclusive because the chartering group is still going to allow the troops to make the decision on whether to discriminate,” Freeman said.