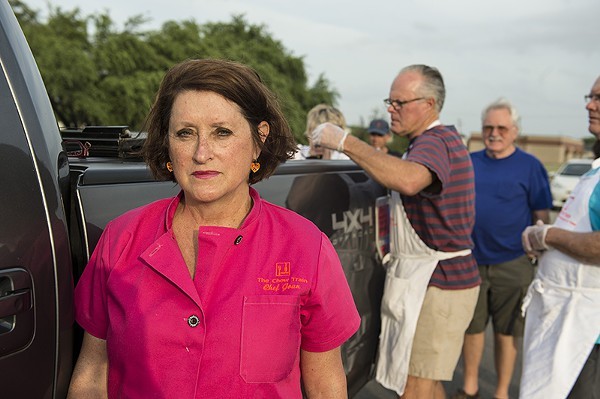 
Medina’s office will spend $1,000 to sponsor training for up 100 volunteers. In a news release, Medina said he is particularly concerned with homeless veterans.


“The only functioning society is the society in which the common good is held as dearly as the personal. San Antonio will continue to rise as we continue to show the foundations for a solid society,” Medina said.


Sophia Erian, a spokesperson for Medina, told the San Antonio Current that the councilman hoped the action would “spur other organizations to say ‘Hey, we might want to sponsor too.’”


The announcement comes on the heels of the Homeless Feeding Summit, a symposium held in late July meant to catalyze dialogue between street feeders and city officials.


The relationship between the two groups had grown tense in recent years, coming to a head in April after Joan Cheever, a long-time hunger activist who runs The Chow Train, a free mobile food service, received a citation for feeding people out of her personal vehicle.

Cheever had all the necessary certifications for food safety, but served out of her pickup truck because it is easier to maneuver and park than her 14-feet-long food trailer.


Cheever rejected a plea bargain from the city on July 7. The citation was dismissed a week later.


At the Homeless Feeding Summit, Cheever proposed a change to the ordinance for which she was cited. Her proposal would ensure that charitable feeding groups like hers would have free access to food handler training through the city, and would provide exemptions in the food code for street feeders with the required training.


Erian said the councilman “definitely” supports Cheever’s proposal. But that likely won’t come before the entire City Council until after September, once the city officials have studied the issue further and the Quality of Life Committee has weighed in.


Cheever said she was encouraged by Medina’s gesture, but she’s standing firm with her demand to change the ordinance.


“What we want as the Good Samaritan community is for the city to act quickly to repeal and revise this ordinance so that street feeders...are not breaking the law,” Cheever told to the Current. “As long as the law is on the books, the goal is to get rid of the law.”


And she’s backing up her rhetoric with potential legal action. Before her citation was dismissed, Cheever and her lawyers drafted a federal lawsuit under the Texas Religious Freedom Restoration Act, which offers protections for most activities that have a religious purpose. Cheever said she would use this defense because feeding the hungry is a form of prayer for her.


Cheever said she still might sue the city if it does not change the ordinance, but has not set a deadline for City Council to do so.


Erian said that Medina’s decision to sponsor street feeders to take the food safety classes was not motivated by Cheever’s potential lawsuit.


“[The lawsuit] is still in draft form, but that can change in a New York minute,” Cheever said. “They’re running out of time, but this is a good start.”