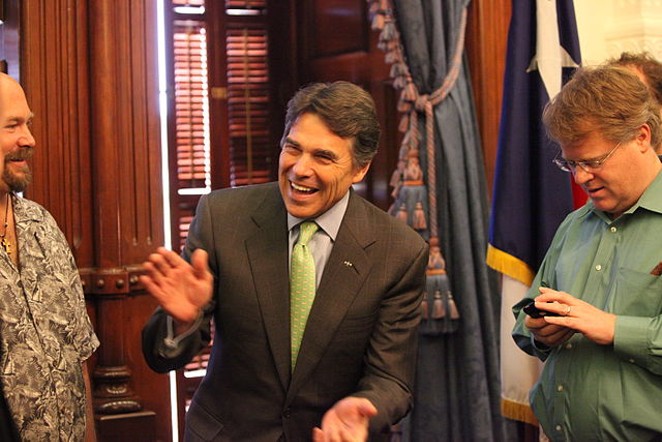 Looking to give back with some volunteer work? Rick Perry’s presidential campaign has you covered.

Perry’s campaign is so strapped for cash that staffers are no longer being paid, according to reports by National Journal, CBSNews and the Washington Post.

Aides were given the option to pursue paying gigs, but most have stuck by Texas' longest-serving governor, campaign manager Jeff Miller told the Washington Post.

"As the campaign moves along, tough decisions have to be made in respect to both monetary and time related resources," Miller said in a statement. "Governor Perry remains committed to competing in the early states and will continue to have a strong presence in Iowa, New Hampshire and South Carolina."

It’s more bad news for Perry, who last week was relegated to the kids’ table debate with other fringe GOP candidates, while better-polling candidates such as former Florida Governor Jeb Bush, Wisconsin Governor Scott Walker and Texas Senator Ted Cruz duked it out in prime time.

Even among the J.V., Perry failed to distinguish himself. His biggest moment in the debate was calling Republican icon Ronald Reagan "Ronald Raven."

Perry’s campaign reported having just over $883,000 in cash on hand at the end of June — a paltry sum for a presidential candidate. It’s also less than half of what Perry has paid so far in legal fees to defend himself against two felony charges related to abusing his powers as governor.

But Perry isn’t totally lacking in financial support. Pro-Perry super PACs raised over $10 million in the second quarter of 2015. It’s not as much as other major candidates (Bush raised $120 million over the same period), the PAC’s cash is probably enough to help Perry through the first few primaries.

Although campaign finance law prohibits the groups from coordinating with Perry’s official campaign, the money can still be used to buy media time, carry out field operations and other functions.

“We’ve got plenty of money," Austin Barbour, a senior advisor to a Perry super PAC, said to the Washington Post. "That’s what I know. And we’re going to put that money to use in Iowa to make sure the governor is in the top three there. The super PAC is not going to let Rick Perry down."