Lyft To Return To San Antonio Under 9-Month Pilot Program 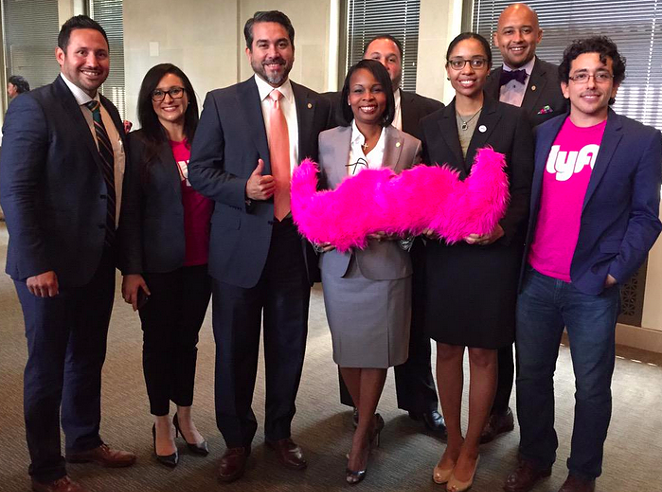 Lyft and its competitor Uber pulled out of San Antonio in March after squabbling with the city over background checks. City Council approved stricter background check requirements, which the TNCs deemed too onerous.

“Sometimes public policy moves by three yards and a cloud of dust. This agreement with Lyft is one small step, but it is one I am glad we have finally made," Councilman Ron Nirenberg, who voted for the pilot program, said in a news release. "This issue has always been about consumer choice and a level playing field. That’s why I have voted to reduce barriers to market entry every time this has come before council. Lack of transportation options causes congestion, costs jobs, and makes San Antonio roads more dangerous."

Lyft will pay San Antonio $18,750 to operate during the nine-month period. And there are plenty of other strings attached. Here’s how the great Mark Reagan broke them down earlier this week:

• The pilot-program is designed so the city can gather performance data on ride-share company operations in San Antonio, with intent to inform any additional changes to the city's vehicle-for-hire ordinance.

• Drivers must comply with the Americans with Disabilities Act of 1990 and receive related training.

• There's a zero-tolerance policy for drugs and alcohol, any kind of harassment and for discrimination, as outlined in the city's non-discrimination ordinance.

• Ride-share companies, drivers, or both must meet new state insurance requirementsbefore participating in the pilot program.

• Requires an inspection before a vehicle begins operating.

• The ride-share companies will provide certain operations data to city staff each quarter.

• And they'll have to pay $1 for trips originating at the airport.

• Both parties may terminate the agreement with 30 days notice.


The new agreement does not include Uber, which still does not operate in San Antonio. Although city officials have met recently with Uber representatives, it's unclear when a new deal will come.

Read the city's operating agreement with Lyft below: