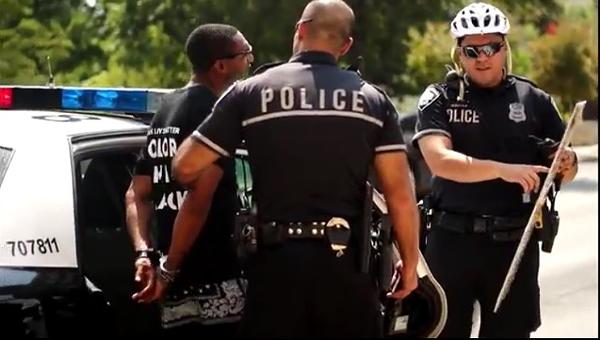 Update: The San Antonio Police Department provided the San Antonio Current with the police report of Mike Lowe's arrest. The story below is updated to reflect information from the report.

Alamo City activist Mike Lowe says he was arrested for disorderly conduct-language during a peaceful protest in downtown San Antonio this weekend.

The activity was part of a national protest called #BlackoutAmerica, locally dubbed #BlackoutSA, which aimed to "combat state-sanctioned, racially-motivated violence against black people."

Lowe has been active and vocal in the #BlackLivesMatter movement in San Antonio and focuses on local allegations of police brutality, along with police shootings in the Alamo City.

According to a police report, Lowe was at Crockett and Alamo early Saturday afternoon after police officers say they heard people chanting "fuck the police" on the river level.

"(Lowe) was approximately 30 feet behind the initial crowd carrying a sign that read ‘Barack Loretta Ivy have position but we the people have the power #BlackLivesMatter color me black' on one side and on the other side it read 'Free The People Fuck The Police Film The Police 'Protest is Confrontation, Protest is Disruption, Protest is the end of silence. It is not the solution, it creates space for the solution' @ Deray,” according to the police report.

Police allege that Lowe then forced two officers off of the sidewalk, hitting one of them on the side of their helmet with the sign.

The officers say they asked Lowe to put the sign down or cross out the f-word because it was offending small children, according to the report.

So police decided to detain Lowe, and say that a crowd of 15 or 20 people gathered around them while screaming.

According to police, Lowe became aggressive so they placed him in handcuffs.

"(Lowe) refused to listen to anything we told him and attempted multiple times to incite the group he was with by yelling commands and chants. At multiple times, other people on the Riverwalk below us yelled at the group ‘shut up, your point is stupid, we don’t care,” the police report states.

Then police arrested Lowe and charged him with disorderly conduct - language, which according to police happens if they think someone "uses abusive, indecent, profane, or vulgar language in a public place, and that language by its very utterance tends to incite an immediate breach of the peace."

There was no violence at the protest.