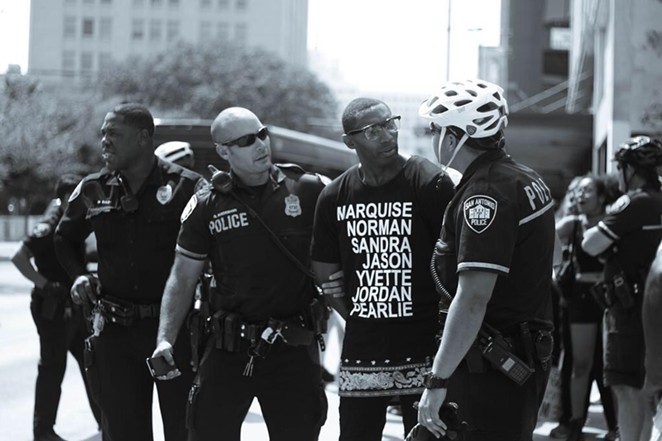 An activist arrested Saturday and charged with disorderly conduct - language says protestors were not chanting "fuck the police."

"I never said it. My sign said enough. No one ever said it," Mike Lowe said.

Lowe and 15 to 20 people were marching through downtown representing San Antonio (#BlackoutSA) in a national protest called #BlackoutAmerica, which aimed to "combat state-sanctioned, racially-motivated violence against black people."

A San Antonio Police Department arrest report says officers were dispatched to the Riverwalk to find "individuals screaming at people and chanting 'fuck the police.'"

At least two other people are listed in the police report, but everything about them is redacted. It is possible, however, that those two other people were witnesses or made the initial call to police.

At least one other person who was at the protest backed Lowe up, saying on social media that protestors were not chanting that.

"For the record we were not chanting 'FTP.' The police wanted Mike to scratch out the word 'fuck.' People were booing, telling us to get a job, all lives matter and the N-word. People didn't like our message and looked for an excuse to call the police," local activist Mira Siente said on social media.

The police report confirms that people were yelling at the protestors.

"At multiple times, other people on the Riverwalk below us yelled at the group ‘shut up, your point is stupid, we don’t care,” the police report states.

As for the sign, it did direct the F-word toward police, albeit in small lettering mixed in with lots of other words, which were in much larger lettering.

"'Barack Loretta Ivy have position but we the people have the power #BlackLivesMatter color me black' on one side and on the other side it read 'Free The People Fuck The Police Film The Police 'Protest is Confrontation, Protest is Disruption, Protest is the end of silence. It is not the solution, it creates space for the solution' @ Deray,” according to the police report.

"You have to be up close to see what the sign said," Lowe says.

The police report also alleges that Lowe forced two police officers off of a sidewalk and hit one of them on the side of their helmet with the sign. Lowe says police initiated this.

"We had finished being around the Riverwalk and we were going back up to the main floor. They (two police officers) turned and walked down my way and saw me and my son. The pathway didn't allow for all four of us on the sidewalk," Lowe said. "So when the officer brushed me, she stepped to the side. He (the other officer) did too, but in doing so he brushed against the sign. At that time, I knew in my head, that's all they needed."

That's when police told Lowe he was offending small children and that he needed to put the sign away or cross out the F-word, which Lowe said he wasn't going to do.

"Different officers arrived on the scene," Lowe said, explaining that one of the officers put her hands on him, which he didn't like, and detained him. Moments later he was arrested. "I'm like, man, that happened so fast."

Lowe alleges that one of the officers who showed up was arrogant and mocked his shirt, which listed the first names of black people killed by police in Texas, including 23-year-old Marquise Jones who was shot and killed by an off-duty police officer with a documented history of racism on February 28, 2014, at a drive-thru on the North East Side.

"One cop walks on the scene real arrogant like and was like none of those guys were even killed in San Antonio," Lowe said. "I''m like, you don’t know?"

Lowe says he plans to fight the charge. He said he filed a complaint with SAPD Internal Affairs yesterday, as well.

"They don't like that disruption," Lowe said of the protest, which targeted a tourist-soaked Riverwalk. "We are bringing and creating a space for this dialogue to happen."

Here is video of the arrest.