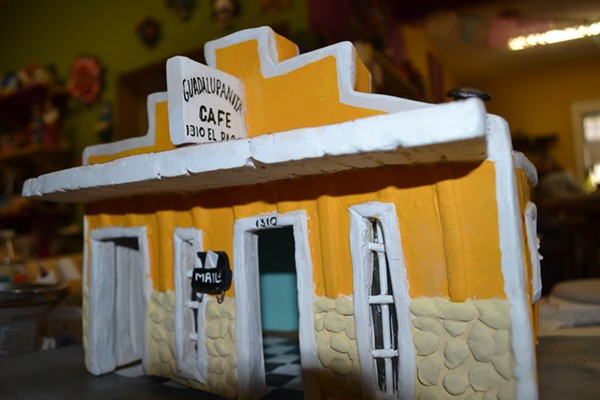 The Esperanza Peace and Justice Center honors the 20th anniversary of MujerArtes, an all-women clay cooperative from the West Side, with "Barrio de Barro: Reclamando y Recordando el Westside de San Antonio" (Neighborhood of Clay: Reclaiming and Remembering the Westside of San Antonio).

The exhibit is free and open to the public from 6 to 10 p.m. Saturday, September 12 at the Esperanza Peace and Justice Center (922 San Pedro Ave.) The exhibit runs through November 13.

The exhibit examines "ongoing conversations around gentrification, urban renewal, city redevelopment, and the socio-economic inequalities facing many urban centered neighborhoods and the issues of immigration, cultural heritage, and preservation."

Those complex subjects are explored through the use of clay pieces that feature houses, churches and local businesses.

"Instead of portraying these structures as eyesores or dilapidated buildings, the clay pieces demonstrate the beauty and significance of the buildings that make up the Westside of San Antonio," Esperanza says in a press release. "The MujerArtes women argue through clay that 'este barrio es bonito' — that the Westside houses, local businesses and by extension the people and culture is beautiful and worth preserving."

Other pieces will pay homage to former MujerArtes members and to those who have passed away.

MujerArtes Cooperative, is sponsored by the Esperanza Peace and Justice Center. Since 1995, the organization has provided working class women art classes at no cost. In the last two decades, more than 300 women have joined the cooperative.