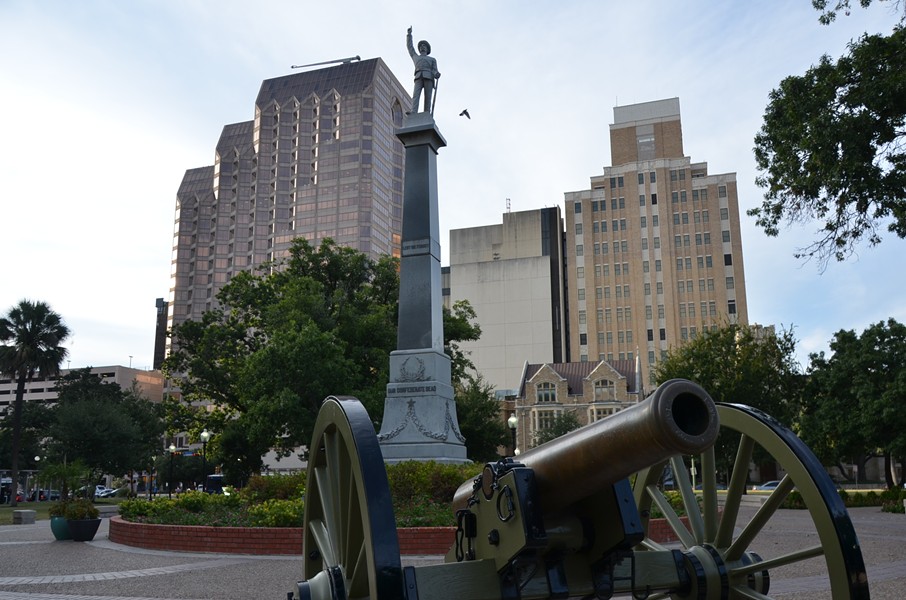 As institutions and governments throughout the South continue to remove Confederate symbols, aftershocks from the debate over how to handle the Confederacy's legacy still ripple through San Antonio.

The backlash against the Confederate flag and other symbols began after Dylann Roof allegedly shot and killed nine people on June 17 at the Emanuel African Methodist Episcopal Church in Charleston, S.C. All of Roof’s alleged victims were black, and photographs emerged of him posing with Confederate flags after the attack.

In early July, City Manager Sheryl Sculley directed her staff to inventory all Confederate symbols and markers on city property. The results of that inventory are below, which Di Galvan, a city spokesperson, gave to the San Antonio Current:

Conspicuously missing from the list is the Confederate Cemetery off Commerce Street. But since the cemetery is privately owned and operated, it is not included in the list.

Most of the markers on city property are from the Texas Historical Commission, and note some interesting nuggets about San Antonio’s Civil War history. Those include:

-San Pedro Park was used a prisoner of war camp for Union troops, and as a Confederate campsite

-Brackenridge Park once hosted a tannery built by the Confederacy

-The intersection of Ashley Road, South Flores Road and Roosevelt Road on the Southeast Side is along the route of the old Matamoros Road, which Confederate soldiers used as the main thoroughfare to transport cotton.

The most notable item on the list is the Confederate Civil War Monument in Travis Park, which attracted San Antonio's collective attention  in late June and early July.

The statue, completed in 1900 to honor Confederate veterans who died in the Civil War, divided city decision-makers. Some supported its removal, while others urged caution before removing any of the city's Confederate symbols, like the Bexar County Commissioners Court voted to do on July 21.

"It is offensive to use the rebel battle flag as a symbol of a city or state but it is also offensive to pretend that Texas was never a slave state or that racism has played no role in our history for the past 150 years," Taylor said in a news release.

Now that the inventory is complete, City Council will likely take up the issue of what to do with the monument. See tomorrow's edition of the Current for more details on that decision.