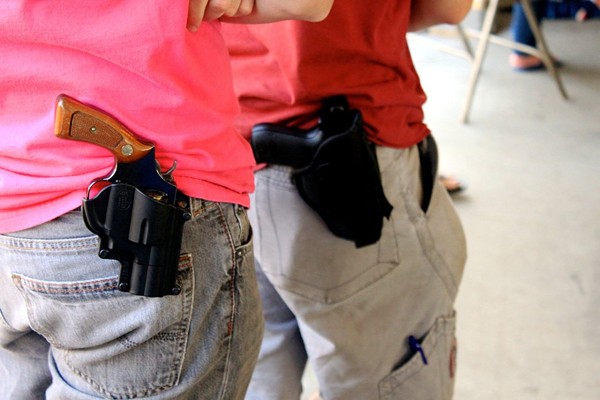 Now that it's legal in Texas to openly carry a handgun, gun-control advocates are figuring out ways to let the gun-toting public know that their firearms aren't welcome.

State Rep. Diego Bernal, in response to legal open carry, will be providing businesses that, for some crazy reason, prefer not to have customers openly carry weapons in their establishments, let holstered Texans know that weapons aren't allowed.

Businesses that want to prohibit concealed carry in their establishments are already required by law to post a sign at their entrances, but the new law requires, you guessed it, a new sign.

"By providing these signs, I hope to help give customers and business owners peace of mind. I believe it is important to do all we can to help business owners create the atmosphere that best suits them," Bernal wrote in a newsletter to constituents.

Texas Gun Sense executive director Andrea Brauer said she is thrilled Bernal will be handing out the signs.

"We are suggesting this to other legislators as well, and hope to see a statewide effort," she said.

At least one has. State Rep. Trey Martinez Fischer, who is a Democrat based in San Antonio, like Bernal, said on Facebook that his office will also distribute signs after seeing the response to Bernal's efforts.