2,500 Happy Texan Couples Able To Marry Thanks To The Supreme Court 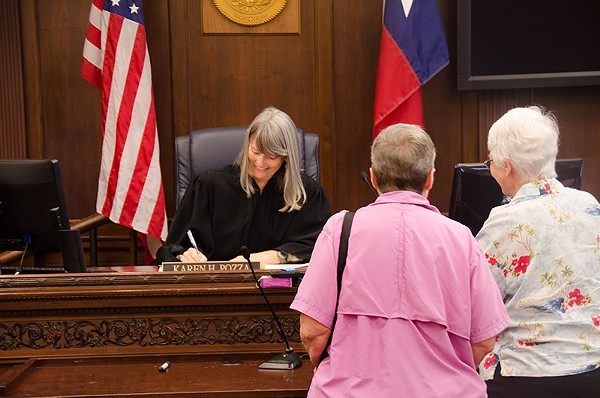 On the morning of June 26, Jordan and Donna Reed were one of the first couples to arrive at the Bexar County Courthouse.

Just after 9 a.m., the Supreme Court ruled that laws banning same-sex couples from getting married were unconstitutional. After the news broke, more and more couples showed up to the courthouse.

Since that magnificent day, state officials estimate that Texas clerks have issued 2,500 marriage licenses to same-sex couples, the Fort Worth Star-Telegram reports.

However, there are still people out there trying to stop marriage equality, including Rowan County, Kentucky clerk Kim Davis, who was jailed because she refused to issue marriage licenses to anyone, citing religious discrimination. Davis said she could not issue the licenses to same-sex couples.

She's back at work today, and with an escort of sheriff deputies, she told media that she won't authorize marriage licenses for same-sex couples, but won't stand in the way of her deputy clerks who agreed to issue the licenses rather than be held in contempt and jailed, according to NPR.

From the NPR report:

"I am here before you this morning with a seemingly impossible choice, which I do not wish on any of my fellow Americans," she said. "My conscience or my freedom."

"My conscience or my ability to serve the people that I love," Davis continued, choking back tears. "Obey God or a directive that forces me to disobey God."

Her decision was clear, she said: "Effective immediately, and until an accommodation is provided, by those with the authority to provide it, any marriage license issued by my office will not be issued or authorized by me."


During Davis' conservative martyrdom, presidential candidates Ted Cruz and Mike Huckabee jockeyed to be the most supportive of Davis, which was quite the spectacle.

But despite people like Davis, Cruz, Huckabee and many others, the good news is 2,500 couples were able to get married in Texas without a "defiant" clerk who won't do their job.