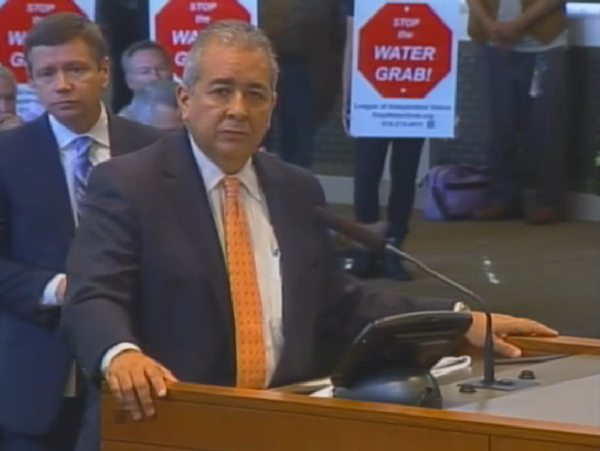 The Mi Agua Mi Vida Coalition is comprised of concerned citizens and groups like the Esperanza Peace and Justice Center, the Southwest Workers Union, the Sierra Club, the Texas Organizing Project and the Green Party, according to a news release.

At the time, Ben Gorzell, San Antonio's Chief Financial Officer, told council members that the average water bill in San Antonio was $55.72. That average is expected to jump to $76.12 in 2020 because of a planned 5 percent rate increase to fund sewer upgrades and water desalination. Including the Vista Ridge Pipeline brings the estimated rate hike as high as 19 percent, according to projections presented last October.

From the beginning of the debate, opponents said the deal would have an adverse effect on families.

Under the SAWS Proposed Rate Structure, an average family of 4 would pay $13.72 more a month for water. This means an additional $164.64 a year. What about households with 5,6,7,8 people? Only a 1 person household will save money, everyone else will have their rates raised. We should not be penalized for our household size while large businesses who use millions of gallons will be paying a cheaper rate than an average family!.

Also San Antonio Residents will also have their rates increased in December for sewage and in the Summer the first increase that will directly fund Vista Ridge.

The Vista Ridge Pipeline is an over $3 BILLION project that plans to take water from the Carrizo Aquifer for the next 30 years. This will affect not only the families that live in Burleson County and the other counties that use the Carrizo as a water source but also low income families in San Antonio who will have to pay more money for water in order to support building and maintaining the pipeline. While LARGE BUSINESSES WILL PAY LESS and use more water!


The 142-mile pipeline is supposed to provide a 30-year supply of water from Burleson County. The project would be functional by 2020 and pump more than 16 billion gallons of water into San Antonio each year. Blue Water holds water leases in Burleson County, and Abengoa would build the pipeline. Each acre-foot of water would cost SAWS around $2,300.

City Council will meet Wednesday for an information-only session on proposals to modify SAWS' water and sewer rate structures.

There are 20 different recommendations that will be discussed.