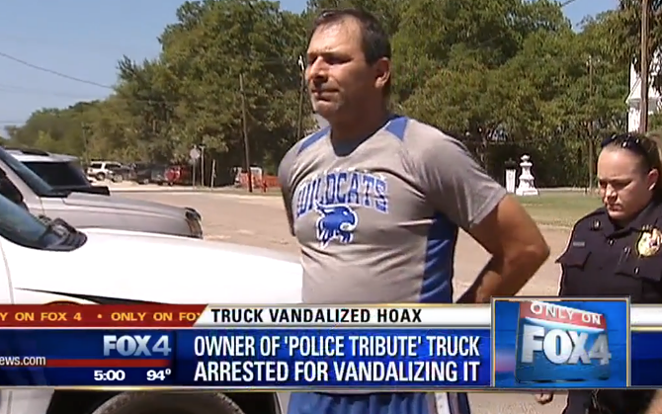 Earlier this month, Scott Lattin of Whitney, Texas, claimed #BlackLivesMatter activists vandalized his truck because it had a pro-police message.  Well, as it turns out, Lattin defaced his own vehicle and was arrested for filing a false police report. The law enforcement enthusiast apparently loves police so much that he was willing to break the law to give them something to do.

According to FOX4 in Dallas, police began to suspect Lattin after noticing discrepancies between what he told the news station and what he told law enforcement. A GoFundMe campaign set up to pay for repairs raised $6,000, with donations mostly coming from police officers, but the fundraising site shut it down after Lattin's scam came to light.

Here are videos of FOX4's reports.


The race-baiting story went viral on conservative news sites such as Breitbart as a means to villainize the #BlackLivesMatter movement, which aims to spark meaningful dialogue about racism in America and call attention to police brutality toward African Americans.

Breitbart's original article, "Disabled Vet's Truck With Pro-cop Message Vandalized: 'Black Lives Matter,'" has been shared over 7,600 times since it was published on September 10. It's opening paragraphs are a masterpiece in right-wing fear-mongering.

“Black Lives Matter” and #FYF (F**k Your Flag) graffiti was sprayed in black paint on the outside of his truck. The vandals allegedly defaced the truck with “F**k your flag, your family, your feelings, your faith,” and tore up the inside of the truck .

#FYF911 or #FYF “black radicals” promise to hold the “imperial powers” responsible for the terrorist attacks on September 11th accountable on Friday, as previously reported by Breitbart Texas. Supporters pledge to burn white people’s symbols of “the illusion of their superiority” and their “false white supremacy.” Those include items such as the American flag, the British flag, police uniforms, and Ku Klux Klan hoods.


In case those paragraphs didn't sufficiently terrify white people, the article made sure to make it clear that black people were out to kill them.

Breitbart Texas reported on August 28th that members of the #FYF911 or #FukYoFlag and #BlackLivesMatter movements called for the lynching and hanging of white people and cops. They encouraged others on a radio show to “turn the tide” and kill white people and cops to send a message about the killing of black people in America.


Once police charged Lattin, Breitbart had to pull back from its enthusiastic effort the discredit #BlackLivesMatter and its supporters. In doing so, the site went from describing Lattin as a "victim" and "disabled veteran" — the absolute worst class of citizen you could possibly wrong — to a "scammer" who duped "cop supporters."

The site's follow-up to its original story didn't gain as much traction on social media as its original report. Since it was published on September 18, the report has only been shared on Facebook 19 times, perhaps because the story failed to satisfy the racially biased narrative that Breitbart aims to portray and attracts its readers to the site.

Breitbart gleefully promoted its original story on its front page since it was first published, removing it only after the hoax was exposed. The follow-up didn't get the same prominent placement on the home page. And Breitbart has not made a correction to its original story, although it continues to maintain traction on social media.

Since the #BlackLivesMatter movement emerged in the wake of the George Zimmerman verdict, Breitbart has published articles intended to paint the activist movement as a dangerous threat to white conservatives. Recent headlines include "Cops, Media Barred From Black Lives Matter Meeting," "Dr. Ben Carson in Ferguson: The Nation Needs to ‘De-Emphasize Race,’" "Black Politician Unleashes Torrent of Racial Epithets to Dismantle Racism," "War on Cops: Ambush Threat in Cleveland," and "#FukYoFlag Movement Calls For Black Lives Matter Violence On 9/11."

Expect Breitbart and similar sites to continue to push a false, racist narrative, and when the story no longer fits an anti-black agenda, expect the sites to quietly correct their routine errors.