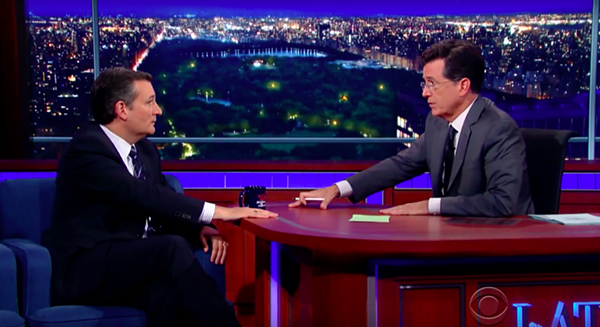 Colbert opened the segment by introducing his guest as “a first-term senator, has an immigrant father, and he’s running for president. No, it’s not a rerun from 2008, it’s Senator Ted Cruz,” referencing the similarities between Cruz’s and President Obama’s backstories.

The 10-minute interview hit a few predictably light-hearted notes to start: Is Cruz surprised by the size of the massive (though actively narrowing) GOP field? “There are another dozen coming,” he responded. What question would Cruz ask Donald Trump, who will appear on Colbert’s show tomorrow? "If he could possibly consider donating $1 billion to our campaign." (Probably can't rule that out).

Though the interview remained civil throughout, the tenor of the conversation changed once Colbert brought up same-sex marriage and the GOP’s favorite talisman, President Ronald Reagan.

“Reagan raised taxes, okay. Reagan actually had an amnesty program for illegal immigrants. Neither of those things would allow Reagan to be elected today. So to what level can you truly emulate Ronald Reagan?” Colbert asked Cruz.

Colbert asked Cruz if he could support two of Reagan’s policies: tax hikes and amnesty for illegal immigrants. After saying “of course” he couldn’t, Cruz refined Reagan’s record, pointing out that he also slashed government spending and regulations. He then segued into the key points of his platform: fiscal responsibility, reining in government regulations and a strict adherence to the Constitution.

“And no gay marriage,” Colbert added, winning applause from the crowd.

Cruz then corrected Colbert, saying that he believed marriage is a question for the individual states, chastising the five Supreme Court justices whose decision paved the way for same-sex marriage in a decision on June 26.

“I believe in democracy, and I don’t think we should entrust governing our society to five unelected lawyers in Washington,” Cruz said.

Cruz barely got through his statement before the crowd began to boo and hiss, only stopping after Colbert said: “Guys, guys — however you feel, he’s my guest, so please don’t boo him.”

Watch a clip from the interview below: