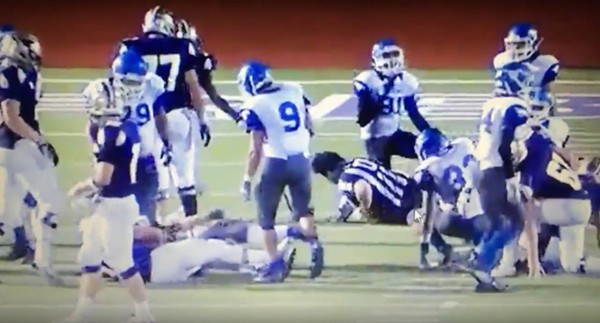 Michael Moreno and Victor Rojas, the two John Jay High School football players who tackled a referee in a game on September 4, were sentenced to 75 days in alternative school yesterday at a Northside Independent School District disciplinary hearing, the San Antonio Express-News reported.

Moreno, 17, and Rojas, 15, could have been expelled from John Jay. Instead they will attend class at Northside Alternative High School until January 15. They have been at the alternative school since September 11, and the days they’ve spent there will count towards the 75-day sentence.

“We were hoping for less time,” said Jesse Hernandez, the students’ lawyer. “We were hoping that maybe they’d make an exception to send them back to [John Jay]. It’s definitely not the harshest punishment they could have given.”

Rojas and Moreno hit official Robert Watts from behind during their game against Marble Falls. The students claim that one of the team’s assistant coaches, Mack Breed, told them to attack the referee after he allegedly used racial slurs on the field and made a series of bad calls.

John Jay Principal Robert Harris said in a letter that Breed admitted to instructing the players to hit Watts out of anger, ESPN reported. Watts has maintained that he did not say anything racist.

Breed was scheduled to appear at a hearing today of the University Interscholastic League, the governing body of Texas high school football. But multiple outlets reported this morning that Breed had resigned from the school and would not appear at today’s hearing, according to his attorney.