Where in San Antonio Is AT&T's GigaPower Actually Available? 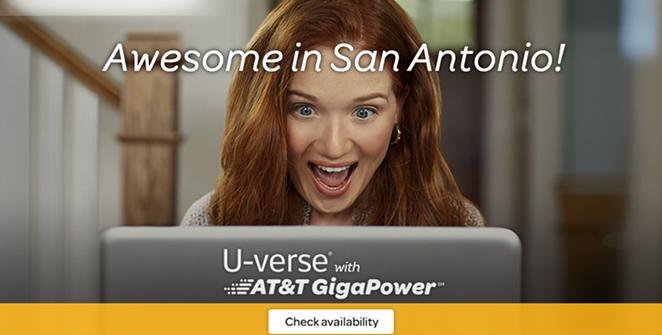 Are you eager to sign up for AT&T's GigaPower? Not so fast.

The telecom was quick to play catch-up after Google Fiber announced plans earlier this summer to include the Alamo City in its expansion. But as far as actually making GigaPower available to the majority of its local customers? Well, AT&T may be more slow-going.

According to Texas Public Radio, the fiber optic Internet service is unavailable to what appears to be the majority of area households. An informal poll revealed that out of roughly 60 respondents, only 11 were able to confirm that GigaPower was available at their address.

While we shouldn't take stock in informal polls, AT&T declined to provide service maps to media outlets for Monday's GigaPower launch, according the San Antonio Express-News. The company only confirmed that GigaPower was available in "parts" of San Antonio, Leon Valley, Live Oak, Selma, Schertz, Cibolo, as well as portions of New Braunfels, Medina, and unincorporated Bexar County.

So why isn't GigaPower available for the majority of San Antonio households? The answer may be the copper line that connects many local AT&T internet customers to the company's network.

GigaPower, offers speeds of 1 gigabit, or 125 megabytes per second. According the att.com, GigaPower customers can download 25 songs in less than a second, or load an entire HD movie in 36 seconds. AT&T fiber optic Internet broadband network makes these lightning-fast speeds possible, if that fiber optic network is connected directly to the home.

While AT&T DSL services also use a fiber optic network, that network generally stops at a neighborhood hub. The company usually relies on copper wiring to bring its Internet connection from the hub to a customer's home, and copper is not capable of transmitting at GigaPower's speed. AT&T must upgrade its network infrastructure before many San Antonio customers can take advantage of its ultra-high speed broadband service.

For households that can sign up for GigaPower, AT&T is charging $70 per month for standalone gigabit Internet service. For Internet and TV, it's $120 a month. Add a phone line to your bundled service and it's $150 per month.

Meanwhile, Google Fiber has its own network to build out. The Internet service provider has not announced a launch date for San Antonio's Fiber launch.