City Council members heaped praise upon McManus during the chummy confirmation period, though some had questions about the process by which he was hired.

City Manager Sheryl Sculley appointed McManus to the job in late September after he reached out to her. After leading the department for nine years, McManus left SAPD in December 2014 to serve as chief of security at CPS Energy. McManus missed law enforcement, and was considering a job with an out-of-state police department when he called Sculley about getting his old job back. He said that taking the CPS job was “not the right decision.”

“My not wanting to go to this city to interview was indicative of how much I love San Antonio and how much I wanted to stay here,” McManus said. “CPS is a great place to work, but it just wasn’t me. This is me.” 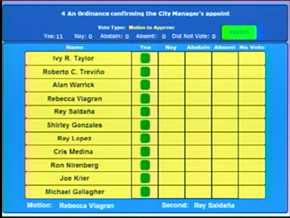 The finalists interviewed with several community panels and individually with Sculley. None of them got the job, as Sculley picked McManus shortly after he reached out to her.

The public comments lauded McManus, but questioned the process by which he was hired. Though reappointing him to his old post is perfectly legal, it rankled some citizens.

“We’re not against Chief McManus. I do not know the man. I’m disputing the process that was used to eliminate all the other minorities that applied for the position.” said Sam Alvarado, founder and president of MADRES, a community activism group. “The process was tainted.”

Sculley explained that the position was still open when McManus reached out to her, and that he “went through a very public process nine years ago” when he was first hired to lead SAPD.

“In the final analysis his qualifications and experience...it was a clear choice that he would be the best to lead the department for the next several years,” Sculley said.

Mayor Ivy Taylor didn’t mention any qualms about the process, instead praising the practice of hiring “the best person for the job regardless of political correctness or other factors.”

“That’s the direction we should be going as a community,” Taylor said.

Other citizens were more supportive of the appointment, particularly members of the LGBT community. McManus made LGBT outreach a point of emphasis as SAPD chief, even serving as Grand Marshall of the San Antonio Gay Pride Parade.

Councilwoman Shirley Gonzales said that the gap between Sculley’s and Taylor’s communication with McManus and the rest of the council being informed is an alarming trend. Councilman Cris Medina said he worried about the public input process being undercut.

“It seemed like that was a little bit undermined. We had a process that was carried out and for whatever reason it was decided that we’d bring [McManus] back,” Medina said, adding that he hoped the process wouldn’t “send a mixed message that San Antonio is not open to attracting the best and brightest.”

McManus plans to implement a multifaceted plan to help the city’s homeless. Though he hasn’t divulged any of its specifics, McManus said to the City Council that using brute force isn’t the solution.

“The reality of the situation is that you cannot strongarm the homeless people into submission. You can’t arrest the problem away. So there’s got to be another approach to it,” McManus said. “We’ll come up with a good way to help the homeless, to deal with the issue holistically.”